New York Court of Appeals spokesman Gary Spencer said seating for the general public would be limited but not eliminated, and a videoconferencing system would be available for attorneys not able to reach court in person.

New York City attorneys sought to maintain continuity for their clients Monday as the effects of COVID-19 brought tremendous uncertainty and change to virtually every facet of society, including the city’s courthouses.

At 5 p.m. Monday, the state court system entered a new stage of its response to the novel coronavirus, postponing all “nonessential” functions statewide and increasing the use of video to conduct matters that could not be delayed. Some counties went further, consolidating court operations to close some courthouses altogether.

By the end of business hours Monday, all in-person arguments scheduled for this week in the state’s appellate departments had been suspended, but the Court of Appeals still planned to hold arguments Tuesday. Spokesman Gary Spencer said seating for the general public would be limited but not eliminated, and a videoconferencing system would be available for attorneys not able to reach court in person.

He’s been reducing meetings by taking more conference calls, he said, but his firm’s attorneys were in court as usual Monday. None of their cases were adjourned on the final day before the court system’s shift to essential functions only, he said.

Bailey said the courts need to strike a balance between maintaining safety and making sure that people still have a way to seek resolution for their problems.

“It’s very important to understand that as horrible as this is … we also have to avoid having chaos and violence in the streets,” he said. “And if businesses and people do not have a place to go air their grievances, we will have chaos and violence.”

That goal can be accomplished online, Bailey said, through remote filing and Skype or other video services. But not all of New York’s courts have established that capacity yet, and Bailey said they need to switch over quickly.

Manhattan-based criminal defense attorney Mark Bederow said that the city’s courts are not, based on his experience, prepared to handle a normal caseload remotely.

He said he assumes that’s why the system is postponing all but essential matters, and for safety reasons, he’s hoping the courthouses will close for all but “absolute emergency situations.”

“This is uncharted territory,” he said. “Even after 9/11 and things like that where there was lots of uncertainty and craziness, nobody’s ever seen anything where—it feels like for the next several weeks and possibly couple of months that there’s just very little happening. I mean across the board, there’s nowhere to eat … everyone’s afraid of getting people sick or getting sick.”

People who are incarcerated are likely to suffer the most, Bederow said, and he wasn’t sure of the solution.

“They certainly have a right to a speedy trial and all that goes with that, but it’s weighed against public safety for everyone,” he said. “Something has to give.”

Julie Rendelman, another Manhattan-based criminal defense lawyer, said she was in triage mode Monday, helping clients who were in particularly vulnerable positions due to the crisis and making sure they felt safe, despite the uncertainty.

Even though the courts’ shift to essential functions only became official at the end of the day Monday, Rendelman said she postponed all her clients’ Monday appearances for safety reasons and met no difficulty in doing so.

Bederow and Rendelman each said they anticipate fewer arrests in the near term. But as the crisis continues, Rendelman said she believes arrests will rise.

Bederow said he expects the weeks and months after the crisis to be “hectic” as the courts try to catch up on all the delayed matters, along with handling the schedule already set for summer.

Bailey said he and his colleagues are deeply worried for the health of their families and clients and also about the crisis’ economic effects.

“We realize [attorneys] are the leaders, we are the helpers, we need to help navigate everyone through this crisis,” he said. “We need to help keep businesses going to improve chances of a recovery.” In the Michael Flynn case, the appointment of Debevoise's John Gleeson, a former federal trial judge and prosecutor, was deemed an extraordinary move matching the “exceptional motion the government made to dismiss” Flynn’s case, one white-collar lawyer said. “We’re kind of in uncharted waters here." Wigdor said the decision did not reflect any change in his view of the truthfulness of Reade's claims. Instead, he cited a "double standard" in the media coverage his former client had received. 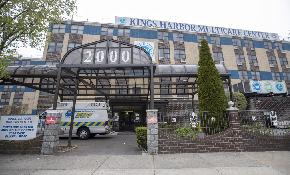 Forty-five residents as of Tuesday have died due to the coronavirus at Kings Harbor Multicare Center, one of a handful of nursing homes statewide that have recorded more than 40 coronavirus deaths, state figures show.