Why Lawyers Should Care About Emojis

Today, there are close to 3,000 emojis in the Unicode Standard. As such, people can communicate a lot more through emojis, if they choose. And, the data shows this is what people are choosing.

Although emojis have been included in smartphone operating systems for more than a decade, they are just starting to make their way into the world of litigation. While Apple’s emoji debut consisted of 54 emojis, made up primarily of different yellow smiley faces, iPhone now offers its users a broad range of hundreds of emojis, representative of different races, genders, cultures and religions. Today, there are close to 3,000 emojis in the Unicode Standard. As such, people can communicate a lot more through emojis, if they choose. And, the data shows this is what people are choosing. Over 10 billion emojis are sent each day throughout the world. Approximately 92 percent of all people who communicate online or through text messages on a smartphone use emojis, with more than one-third of them using emojis daily. Analysts have referred to the uptick in emoji use as “watching the birth of a new language.” Breaking Up Is Hard: Protecting Your IP When an Employee Leaves

Disputes over IP ownership can have significant negative impact on a company’s value, growth potential, and reputation, even if the company ultimately comes out the victor. Therefore, it is critical to have a well-defined and consistent exit process for departing employees, regardless of whether the departure is amicable or contentious. Allowing an injured plaintiff to videoconference his family into the courtroom on monitors displayed to the jury is a step too far, according to one Pennsylvania judge. 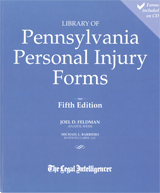