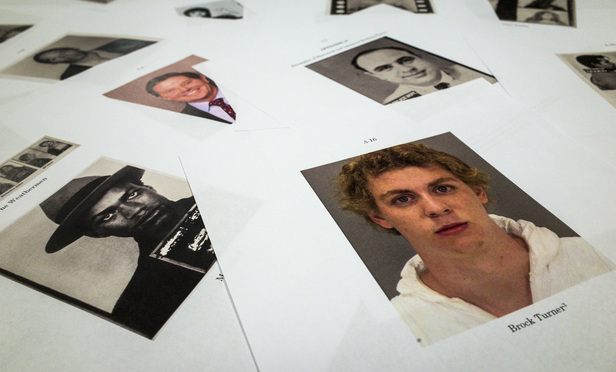 An amicus brief from the Reporters Committee for Freedom of the Press featured a collection of historic and contemporary booking photos.

As a whole, the group shares little in common. But this week, lawyers for some of the nation’s leading news organizations found a common thread connecting Rosa Parks and the Rev. Martin Luther King Jr. with the likes of John Dillinger and Al Capone, Lee Harvey Oswald and Sirhan Sirhan, O.J. Simpson and Brock Turner.

Each was arrested—a shared experience memorialized in a mug shot—at least once.

In an amicus brief filed Wednesday in the U.S. Supreme Court, these booking photographs were juxtaposed to prove a point: That the images have a historical value, building an understanding of the context behind arrests, and should be widely available to the public.

The Reporters Committee for Freedom of Press and 28 media organizations filed the brief in support of the Detroit Free Press, which sued for public access to the mug shots of four Michigan police officers booked on federal bribery and drug conspiracy charges. The Detroit paper, represented by Orrick, Herrington & Sutcliffe, is fighting to revive its public-records case.

Covington & Burling; Baker & Hostetler; Davis Wright Tremaine; Holland & Knight; Weil, Gotshal & Manges; and Wiley Rein were among the law firms identified on the brief as counsel for the media organizations.

“The significant value to the public of access to booking photographs is underscored by the role that they have played in informing our understanding of important historical events,” the Reporters Committee said in the amicus brief. “Many booking photos have come to symbolize critical moments in American history.”

The Reporters Committee argued in its brief:

The public’s interest in access to these photos is not voyeuristic, but is rather an interest in understanding the broader social context behind the arrest such photos serve to record. For example, the booking photograph of civil rights icon Rosa Parks depicts dignity and resolve in the face of a government enforced system of racial segregation. Her image conveys a powerful commitment to her act of civil disobedience, in addition to serving as an official record of the fact that she was arrested.

The publication of booking photos, the amicus brief argued, “has in numerous instances helped to inform the public and shaped the public’s perception of current events.”

The Reporters Committee pointed to the recent California case against Turner, who was sentenced to six months in jail on charges of sexual assault. Turner, the amicus brief said, “became the subject of fierce public debate regarding the media’s depiction of him” after his arrest.

“Once released, his booking photograph … provided the public with an accurate image of Turner at the time of his arrest, an image far different from the one depicted in other photographs that were being used to report on his trial,” the Reporters Committee said. “Publication of Turner’s booking photograph thus contributed meaningfully to public debate about his treatment within the criminal justice system.”

The centerpiece of the mug shot case is a July ruling from the U.S. Court of Appeals for the Sixth Circuit. The court, sitting en banc, overturned an earlier panel ruling that had permitted the disclosure of booking photos of defendants arrested on federal charges. The court said in its new ruling that the earlier decision, from 1996, doesn’t carry the same weight in the internet world.

“In 1996, this court could not have known or expected that a booking photo could haunt the depicted individual for decades,” Judge Deborah Cook of the U.S. Court of Appeals for the Sixth Circuit wrote for the majority. “Experience has taught us otherwise.”

Cook, who cited the privacy interests of defendants, said “a disclosed booking photo casts a long, damaging shadow over the depicted individual.” She added: “Today, an idle internet search reveals the same booking photo that once would have required a trip to the local library’s microfiche collection.”

There’s no certainty the justices will take the Detroit Free Press case, which is set for review at the court’s Jan. 6 conference. The government’s Supreme Court brief is due by Jan. 19.

The Reporters Committee amicus brief is posted in full below.