Lohan will act as exclusive spokesperson for Lawyer.com for the next 12 months. 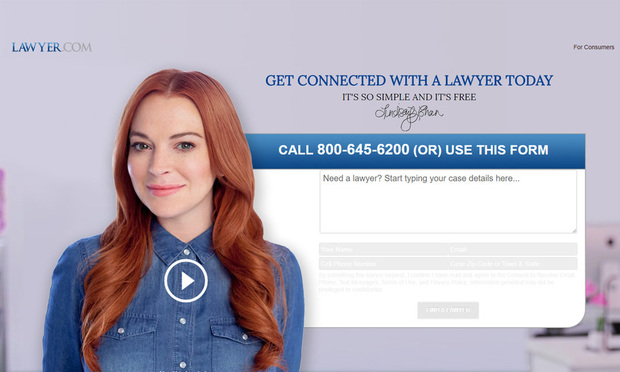 In a surprisingly frank admission, Lindsay Lohan discussed her DUI charges: “Let’s not pretend like I didn’t get one. Or two. Or three. Or, some others,” she tells the camera. Lohan’s comments weren’t part of a reality show or interview, but rather part of an ad spot for Lawyer.com.

Lohan will act as exclusive spokesperson to the attorney marketplace website for the next 12 months, and will serve as a marketing and brand adviser to the company during that time. Lohan’s compensation for her spokesperson role also includes a “substantial option ownership position in the company,” according to Lawyer.com CEO Gerald Gorman.

Extending GDPR, CCPA Rights to All a Way to 'Future-Proof' Your Business

More corporate legal departments are eyeing the impending influx of state-level data privacy laws as an opportunity to get ahead of the curve and provide privacy rights to all users. But that might be easier said than done, a Legalweek (year) 2021 panel notes. Who Is in Control? Corporate Counsel and Others Struggle Over Contract Process

Who is responsible for decision-making in the contract process is unclear, with confusion often between law departments and other corporate functions, according to a new report.