How Stratford Attorney Clinched $85,000 Settlement for His Client in MVA

Stratford attorney Ryan Miller has secured an $85,000 settlement for his client injured in a 2017 car wreck.

Faced with a defense offer of only $10,000 for a client who suffered left knee pain from a car accident which was not cited in a workers’ compensation claim, plaintiffs attorney Ryan Miller had to fight back on two fronts.

Miller, co-owner of Statford’s Miller & Morilla, had to deal with the fact that not only was the left knee pain, which culminated with surgery following the February 2017 car accident, not cited in  workers’ compensation reports, but he also had to answer pushback from insurance defense counsel, who said his client, Michael David, didn’t complain about the injury for more than a year. Hartford Lawyer Relied on Drawings to Clinch $660,000 for Plaintiff Danbury attorney Greg Klein helped secure nearly $90,000 for his client—who was injured when a car ran over his left leg in July 2020. 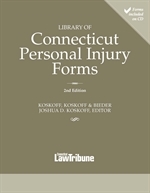 175+ model forms for all types of personal injury cases, from intake to final disposition that were created, tested, and honed by attorney-experts in the field.