Veteran litigator Samuel Rosenthal has written the book on corporate director and officer liability, the 1,000-plus-page Director and Officer Liability in Financial Institutions: A Deskbook .

Samuel Rosenthal first became interested in corporate director and officer liability during the savings and loan crisis of the late 1980s and early 1990s, when the former federal prosecutor joined the ranks of attorneys defending S&L institutions. Two decades later, hes written the 1,000-plus-page Director and Officer Liability in Financial Institutions: A Deskbook (Bloomberg BNA, 2012). As a longtime litigator, the Patton Boggs partner is used to hearing directors wonder whether signing up for the board was worth it. Every client who gets sued asks that question, Rosenthal says. But in detailing todays regulatory environment and outlining defense strategies, Rosenthal hopes the book will help directors avoid trouble in the first place. The idea is to warn peoplethese are the things that youve got to keep an eye out for, and try to institute policies and procedures that will make your institution safer, he says. Recently, CorpCounsel.com spoke with Rosenthal about the new volume. A condensed version of that conversation follows. CorpCounsel.com: Do you see many parallels between this most recent economic crisis and the S&L crisis in terms of director suits? 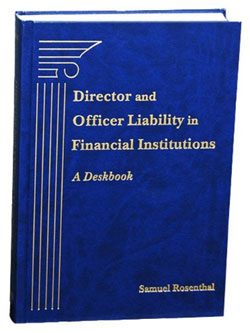 Samuel Rosenthal: I see a lot of parallels. Theres a desire to single people out, to blame the directors and officers for what in many respects are regional problems, in many respects are national economic problems, sector problems, industry problems. And so I see the kind of scapegoating going on that went on in the S&L crisis, too. Its as if everybody wakes up one day and says, Gee, bankers really have no moral fiber. Well, you have to look at the whole macro environment which were in. Its not that bankers have no moral fiber, its that the economy is really suffering and financial institutions are failing as a result. Its not just that the bankers failed to do something. CC: At the same time, a lot has changed in terms of what directors and officers can be liable for. SR: There are many things that now will trigger a tremendous response from regulators, which to the layperson, may not seem if theres any real criminal or willful intent. For example, handing of suspicious activity reports [SARs]. When someone engages in a transaction thats suspicious, a bank has to file an SAR. The board is to be made aware of those. The board is not allowednor is anyone elseto tell the people being identified in the SAR that one is being filed. Most people wouldnt realize thats not allowedthey wouldnt have the sense that that could impose criminal penalties. Much of what goes on in the regulatory world is not intuitive. And so the banker, the mortgage company, and others who are operating financial institutions really have to have in placewhether its in-house counsel or outside counselpeople who are there to advise them every step of the way. They cant rely on their sense of right and wrongits much too complicated and much too heavily regulated for that. CC: What role does the general counsel have to play in making board members aware of those complexities? SR: The in-house counsel has the obligation to advise the board, but in doing so can rely on outside counsel, can rely upon a compliance officer, and can rely to some extent on continuing education programs. For example, sending the Bank Secrecy Act/anti-money laundering officer to training programs so they become the knowledge source for the staff. But I have a clienta community bankinvolved in negotiations to be acquired. One thing theyre saying is, We cant afford the regulatory oversight. Its just too expensive for us to hire any one of the big firms to constantly be advising us as to what we can and cant do. So what we need is to be acquired by a larger bank that has an in-house staff or can afford to pay outside counsel. On a larger scale that makes sense. The smaller banks are getting gobbled up because its just too expensive to have a staff for their size operation. CC: In the book, you also address defenses a director can use. What are some of those? SR: One defense is, I had on staff the right people. They advised us what to do, and we made the right decision . . . We had the systems in place. Actually thats one of the most important things the courts focus on. Its not, Did you make the right decision? Its, Did you have the right systems in place, so that when something occurred you dealt with it in a reasonable and appropriate manner? The courts will not second-guess the decision of the director. They will second-guess whether or not there was a process in place by which the director made a reasonable decision. CC: What happens, though, when something goes wrong at an institution? Who ultimately bears responsibility for that? SR: It depends on what went wrong. If the answer is that the bank, mortgage company, whoever, took a certain amount of risk, thats probably what the shareholders wanteda reasonable risk in relation to the potential profit. And if that risk didnt pay off but the shareholders were cognizant of it, then probably the shareholders deserve to shoulder the blame. If the answer is no, this wasnt reasonable risk, this was really people lining their own pockets and stealing money, thats a whole different story. The shareholder never assumes that risk. And those folks who were guilty of that deserve to pay the consequences. So to some extent it depends on what the particular problem is thats brought the downfall of the institution. Some of these transactions are ones that could have resulted in great profit, and there really isnt any evidence of willful misconduct. Those are not ones that should be used to prosecute or bring cases against directors and officers who took that risk. CC: Overall, what lessons can readers take from your book? SR: How can people avoid litigation? I think the most important thing would be to read the book and say, Ah, I see a problem coming, I think I can avoid it. So the book would serve two purposes. One is preventative medicinelooking at the horizon and seeing whether there are policies or processes that are lacking. And if there are, and for those folks who are already in the midst of a problem, to be able to figure out, is it being handled properly, and are there things they can do to mitigate the damages and assess what the liability is.


Personal injury firm seeking a full-time Litigation Paralegal with at least 5 years experience.Applicants must have complete knowledge of al...


Duane Morris LLP has an opening in its growing South Florida offices for an associate to join its busy corporate practice. Ideal candidate w...