Michael Avenatti Will Represent Himself in His Client Theft Trial

Avenatti, who faces 200 years total if convicted, chose to represent himself in his California client theft trial.

Michael Avenatti will represent himself in his California client theft trial, wrestling the spot from his taxpayer-funded lawyer minutes before a jury was empaneled Tuesday in an Orange County federal courtroom.

In an extraordinary move in a high-stakes white-collar criminal case, Avenatti stood as U.S. District Judge James V. Selna’s clerk was about to swear in 12 jurors and said he had a “Faretta issue,” referring to the 1975 U.S. Supreme Court case Faretta v. California, which established defendant’s right to self represent. 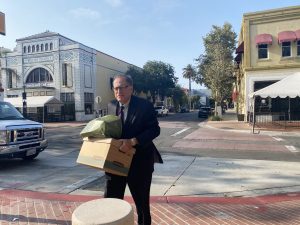