By Robert Storace | April 09, 2020 at 01:29 PM | The original version of this story was published on Connecticut Law Tribune
X

The case of 148 civil immigration detainees reached the court at a “grim moment” during the COVID-19 pandemic, according to a federal judge in Boston, who granted class certification to plaintiffs suing the U.S. Immigration and Customs Enforcement agency.

Class certification in Savino v. Superintendent of Bristol County House of Corrections means that plaintiffs attorneys can submit requests to release the detainees collectively, as opposed to on an individual basis.

The petitioners are civil immigration detainees “who say they are held in tight quarters and unable to keep safe distances from others who may, and, with time, inevitably will, carry the highly contagious virus,” according to Judge William Young’s 29-page memorandum and order issued Wednesday.

Representing the defendants are Thomas Kanwit and Michael Sady of the U.S. Attorney’s Office in Boston. Neither responded to a request for comment Thursday, but ICE could appeal to the First Circuit Court of Appeals in Boston.

Meanwhile, Young has released 18 of the detainees. His new ruling could see him release more detainees in bulk, according to Oren Nimni, an attorney for Lawyers for Civil Rights in Boston.

Nimni, one of the plaintiffs’ attorneys, Thursday said his group will continue to provide the judge with 10 briefs per day, which will include the names of 10 detainees.

“The judge’s ruling allows him to look at detainees collectively, and not have a bunch of lawyers filing individual cases for their clients,” he said.

Nimni said Young is expected to make an announcement by the end of the day Thursday about releasing more plaintiffs.

“These detainees are in extremely dangerous conditions,” the attorney said. “This facility in particular in North Dartmouth has a lack of hygiene. It has broken showers and sinks. There is no access to soap and cleaning supplies. They do not have the ability to socially distance.”

The detainees, Nimni said, are not in detention for criminal matters, but for civil cases.

“They all violated some part of the civil code that regulates immigration,” he said. “It could be for overstaying their visa or something like being in the country without status.”

In his ruling, Young noted the detainees “allege that their beds are situated only three-feet apart and that meals are inadequate and eaten in close quarters. Indeed, the government has provided the court with photos of the sleeping quarters in the facility and this appears to be an inaccurate description.”

Joining Lawyers for Civil Rights in representing the plaintiffs are The Lawyers Committee for Civil Rights and Economic Justice and members from the Workers and Immigration Rights Advocacy Clinic at Yale Law School. 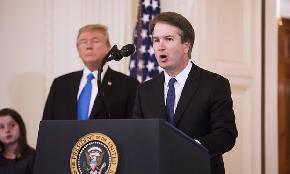 Legal conservatives point to recent rulings on DACA, LGBTQ rights and abortion to argue that, despite President Trump's best efforts, not enough has been done to shift the Supreme Court in their favor.