By Meredith Hobbs | October 10, 2019 at 04:05 PM | The original version of this story was published on The National Law Journal
X 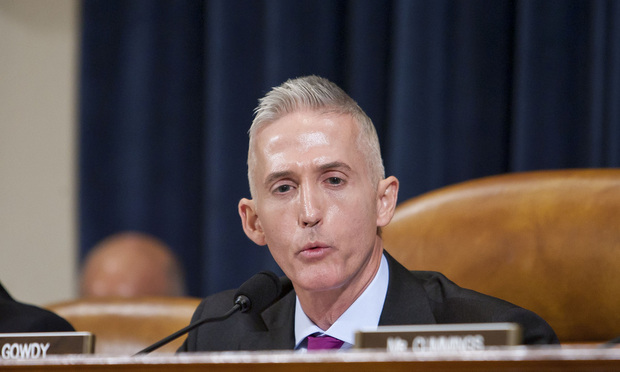 Trey Gowdy during a House hearing of the Select Committee on Benghazi on Oct. 22, 2015. (Photo by Diego M. Radzinschi/ALM)

Former Republican Congressman Trey Gowdy, who announced Wednesday that he’s joining President Donald Trump’s legal team, is the second lawyer from Nelson Mullins Riley & Scarborough to join the defense of the congressional impeachment investigation into the president’s contacts with Ukraine.

Jon Sale, a former special Watergate prosecutor who co-chairs Nelson Mullins’ white-collar defense practice, confirmed Oct. 1 that he’d signed on as Rudy Giuliani’s lawyer for the investigation. The House Intelligence Committee on Sept. 30 subpoenaed Giuliani, who is Trump’s personal lawyer, to release documents concerning the Ukraine controversy to its members by Oct. 15.