A federal judge in Washington, D.C., on Monday tossed a local restaurant’s “unfair competition” lawsuit against President Donald Trump and his Pennsylvania Avenue hotel, finding the D.C. business owner’s complaint had failed to state a claim against the president.

U.S. District Judge Richard Leon’s ruling comes more than a year after the owners of Cork Wine Bar, the upscale D.C. restaurant, sued Trump and Trump Old Post Office LLC, the business entity that operates Trump International Hotel. The restaurant’s owners initially sued in D.C.’s Superior Court—alleging Trump’s promotion of his hotel and its restaurants diverted customers away from their business—but the lawsuit was moved to the U.S. District Court for the District of Columbia. 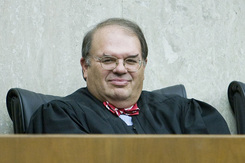