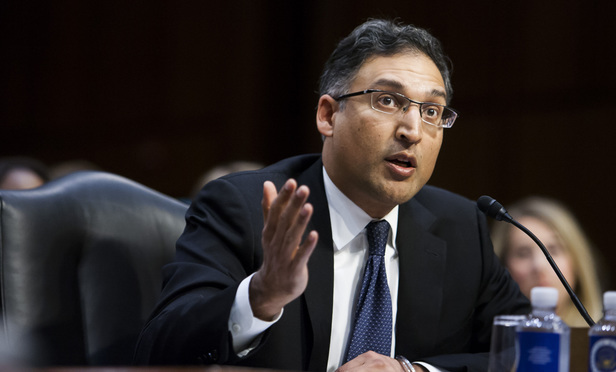 Why Did Neal Katyal Go an Extra Mile for Neil Gorsuch?

“Judge Gorsuch and I come from different sides of the political spectrum,” Katyal said in his introduction. “We disagree about many things. But we agree on the most important things: That all people are equal before the law, and that a judge's duty is to the law, and to the Constitution above all.”

By tradition, U.S. Supreme Court nominees are introduced to the U.S. Senate Judiciary Committee for their confirmation hearings by the senators from their home state.

The two senators from Colorado introduced Neil Gorsuch on Monday, but they were joined by a highly unusual third party: Hogan Lovells partner Neal Katyal, former acting U.S. solicitor general in the Obama administration, and a lead lawyer in the litigation against President Donald Trump’s travel ban executive order.

“Judge Gorsuch and I come from different sides of the political spectrum,” Katyal said in his introduction. “We disagree about many things. But we agree on the most important things: That all people are equal before the law, and that a judge’s duty is to the law, and to the Constitution above all.”

Katyal did echo Democratic anger over the treatment of President Barack Obama nominee Merrick Garland, whom Republican senators refused to consider last year. “I am, as so many Americans are, outraged that Merrick Garland does not sit on [the court] today,” he said in his statement to the committee. “I have no doubt that if Merrick Garland had been confirmed and another vacancy had opened up, Judge Gorsuch would sail through close to 100-0. But that isn’t the world we are in. It is a tragedy of national proportions that Merrick Garland is not on the court.”

Katyal invented a word to describe Gorsuch: “humability,” a mash-up of humility and ability. Soon after Trump tapped Gorsuch as his nominee Jan. 31, Katyal wrote a column endorsing him in The New York Times.

Katyal’s prominent role in support of a nominee who could be voted down by many if not most Democrats in the Senate raised questions and drew both praise and criticism. One tweet said: “With embrace of Gorsuch @neal_katyal has become a much less appealing future Supreme Court nominee. I get his thinking but disagree strongly.”

Katyal could have shown his support in a less high-profile way. He could have joined a group letter praising Gorsuch submitted by other veteran Supreme Court advocates—including Lisa Blatt of Arnold & Porter Kaye Scholer, Jeffrey Lamken of Molo Lamken and Kathleen Sullivan of Quinn Emanuel Urquhart & Sullivan.

Why did Katyal go full-bore, instead?

“I introduced Judge Gorsuch because he is, in my judgment, an outstanding judge,” Katyal said in an email to The National Law Journal on Tuesday. “Just plain merit. And because I wanted people to say what they believe. If you are someone so outraged by what has happened to Merrick Garland that you can’t vote for anyone, say that. What I think is inappropriate is to attempt to destroy and caricature an honorable man and judge up in the process. And that’s why I said what I said.”

Katyal shrugged off the hostile reaction to his Gorsuch endorsement. “I’ve had all sorts of hate mails and angry conversations before!” Katyal said. “I think the real issue is what it underscores about the confirmation process. Many of my friends, including the most talented people in my generation, are refusing to put themselves through what has become a completely broken confirmation process.”

The process has become “blood sport,” and affects not only nominees but their supporters, Katyal said.

“No party has been innocent in this. For every Miguel Estrada there is a Caitlin Halligan,” Katyal told the NLJ, referring to Republican and Democratic judicial nominees who were blocked in the Senate. “And who is suffering? Our courts. Our people. If we don’t do something, we are going to condemn the courts to be staffed only by the few, the timid who say nothing and accomplish nothing.”

Katyal said in his Senate remarks Monday that he wasn’t prompted to advocate for Gorsuch “by any sense of his whether the results in my cases or other cases that matter to my wide-ranging client base would come out one way or the other if Judge Gorsuch casts the ninth vote.”

“I could not begin to guess,” he said in his testimony. “Like others who litigate in and advocate before the court who have spoken out historically about nominees, the bottom line is that we all want a court composed of fair people with the highest professional standards.”