“Someone you know, someone in your family, or someone you love currently relies on or will need these services,” District 5 U.S. Rep. Nikema Williams (D-Atlanta) said in a statement.

A Georgia representative is proposing that Congress condemn attempts to criminally prosecute people who perform abortions, have abortions or experience miscarriages.

Rep. Nikema Williams, an Atlanta Democrat who formerly lobbied for Planned Parenthood in the Southeast, introduced her resolution Thursday, and has already collected 115 co-sponsors, all Democrats, her spokesman said. 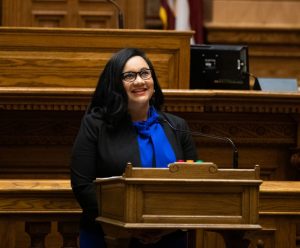 Then-State Senator-elect Nikema Williams, a Democrat from Georgia, speaks before members of the Electoral College cast their votes at the Georgia State Capitol in Atlanta, Georgia, U.S., on Monday, Dec. 14, 2020. Electoral College members from the battleground states of Pennsylvania, Wisconsin, Georgia and Arizona cast their official votes for Democrat Joe Biden on Monday, a moment some Republican lawmakers have said should mark the end of President Donald Trump’s attempts to overturn the results. Photo: Dustin Chambers/Bloomberg For U.S. Supreme Court Justices, Secrecy Is Part of the Job