One thing is clear: Second Hundred firms are on a hiring binge. What's not certain is when—or whether—it will pay off.

Seldom has the strategic divide between The Am Law 100 and the Second Hundred been so stark. Faced with a tepid economic recovery in 2012, the big boys played it safe—and their smaller competitors gambled on growth. After a disappointing 2011, the Second Hundred took in a combined total of $18.51 billion in gross revenue. But almost all that top-line growth was achieved through leverage. Total head count grew by 885 lawyers, a 3 percent increase that more than reversed a 2.5 percent drop in head count in 2011, while the total number of equity partners rose 1 percent, and the nonequity partnership ranks swelled 10.1 percent. The result: weak growth in per-lawyer and per-partner metrics. Compare that to The Am Law 100, where total head count increased just 0.8 percent, the total number of equity partners was flat, the number of nonequity partners grew just 2.5 percent, to 12,909, and growth in per-lawyer and per-partner metrics was more robust. Second Hundred firms are clearly wagering that, as the economy improves, their lower rates will drive work their way, and that their investment in new partners will pay off. Time will tell. 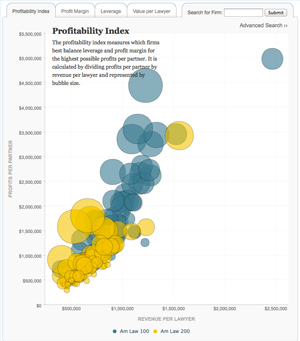 INFOGRAPHIC: Click here for an interactive chart comparing The Am Law 200 firms to those in The Am Law 100, based on four key metrics of law firm economics.
Gross Revenue
Profits Per Partner
Revenue Per Lawyer
Value Per Lawyer
Compensation – All Partners
The Firms, A-Z
Am Law 200 Extra: The Recession’s RPL Winners

An interactive chart plotting the growth in revenue per lawyer at the 186 firms that were members of The Am Law 200 in each fiscal year since 2008.
Am Law 200 Extra: Rich in Profits and Getting Richer

An interactive chart plotting the growth in profits per partner at the 186 firms that were members of The Am Law 200 in each fiscal year since 2008.
Methodology

The 2013 Am Law 200: The Second Hundred Bets on Bulk One thing is clear: Second Hundred firms are on a hiring binge. What’s not certain is when—or whether—it will pay off.
The Am Law 200′s Haves and Have-Nots Some firms took a beating during the recession; others were barely fazed. Who thrived, who merely survived—and why?
Polsinelli Banks on Healthy Living Will expanding its health care practice to high-cost markets like Washington, D.C., and Los Angeles harm the firm’s midwestern price advantage?
Turning 50, Munger Posts Big Gains Munger Tolles & Olson marks its 50th anniversary with a second year of double-digit profit growth
Irell Enjoys Another Year of Profit Growth A double-digit boost keeps Irell & Manella’s profits per partner among The Am Law 200′s highest.
Big Fee Boosts Holland & Hart’s Bottom Line A contingency payout from a pesticide case fed a 22 percent increase in the Denver-based firm’s gross revenue.
For Akerman, a Turnaround Story After a turbulent 2008, Miami’s Akerman Senterfitt is now basking in the sun.