The firm grew revenue for the sixth straight year on the back of a boost in its New York office and client work across borders.

Mayer Brown in 2018 enjoyed one of its strongest financial performances in recent years, driven by nearly doubling its corporate practice in New York and more cross-border legal matters.

The Chicago-founded international firm’s revenue grew nearly 6 percent last year to just shy of $1.4 billion, according to preliminary ALM data. Profits per equity partner rose 8 percent to $1.7 million, and revenue per lawyer was up nearly 6 percent, at $885,000. The firm’s head count was virtually flat at 1,570 lawyers, while its ranks of equity partners declined by about 6 percent to 274. 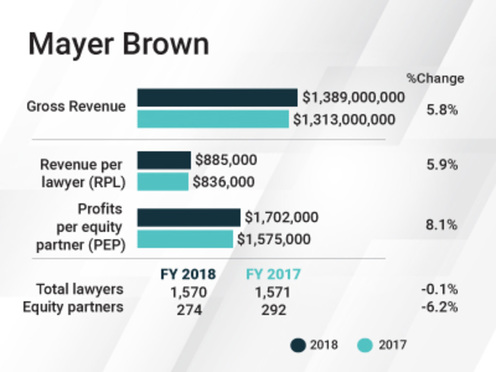 Part of the firm’s success was due to growth in its New York corporate practice, where head count rose from about 30 lawyers to more than 60 during the year, firm chairman Paul Theiss said in an interview.