Welcome to Compliance Hot Spots, our weekly snapshot on white-collar, regulatory and compliance news and trends. Thanks for reading, and let's jump in!

Welcome to Compliance Hot Spots, our weekly snapshot on white-collar, regulatory and compliance news and trends.  Thanks for reading, and we’d love your feedback. I can be reached in Washington at [email protected] and at 202-828-0315. Follow me on Twitter! 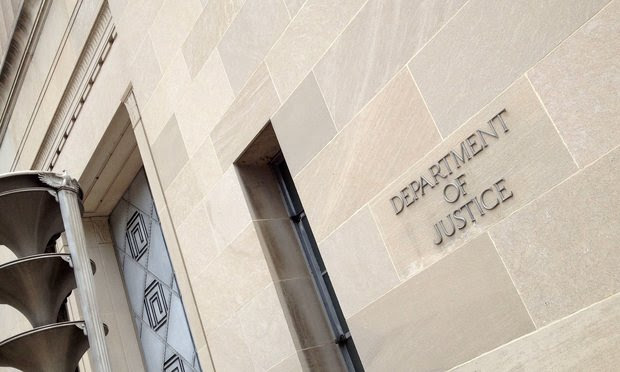 A Change at the Top of DOJ’s ‘Foreign Agent’ Unit

In March 2019, as Special Counsel Robert Mueller III was winding down the Russia investigation, the head of the Justice Department’s national security traveled to New Orleans with a message for lawyers gathered at the white-collar defense bar’s premier annual conference.

With prosecutions of President Donald Trump’s allies, Mueller had breathed new life into an obscure, decades-old law requiring the disclosure of foreign influence activities in the U.S. And in the Big Easy, John Demers, the head of the Justice Department’s national security division, declared that enforcement of the Foreign Agents Registration Act, or FARA, was only getting started.

Behind the ramp-up in enforcement, Demers announced, would be none other than a member of the Mueller team: Brandon Van Grack.

Two years later, after presiding over a period in which the Justice Department more aggressively demanded disclosure of influence work for overseas powers, Van Grack is stepping down. Succeeding him is Jennifer Kennedy Gellie, a career prosecutor in the Justice Department’s national security division with experience bringing espionage cases.

“Brandon Van Grack was central to the department’s strengthened focus on combating malign foreign influence through the use of FARA and other tools,” Demers said in a prepared statement to The National Law Journal. “We will miss his judgment and expertise but he leaves behind him a strengthened unit of experienced lawyers that he helped develop. Now led by career counterespionage prosecutor Jennifer Gellie, the department’s focus will not diminish.”

For the small (but ever-growing) FARA defense bar, the transition represents a momentous occasion. As one law firm partner told me, Van Grack’s time at the helm underscored the degree to which the Justice Department’s FARA unit can be “personality-driven.”

Van Grack, for instance, brought a prosecutor’s touch to the unit, presiding over a period in which it increasingly showed its teeth after years of lax enforcement. Indeed, the Justice Department has made criminal enforcement of FARA a priority while also threatening other court action when consultants believed to be subject to the law’s disclosure requirements have refused to register as “foreign agents.” Who Got the Work

>> Mayer Brown‘s Andrew Pincus represents the U.S. Chamber of Commerce and other business advocates who are supporting Microsoft in a court challenge seeing tougher judicial scrutiny of government efforts to secretly obtain data from cloud storage providers. Pincus’ brief, filed in the U.S. Court of Appeals for the Second Circuit, addresses “gag orders” in which the government prevents third-party cloud service providers from informing customers when their data has been accessed as part of an investigation. “These gag orders greatly enhance the government’s power because—in sharp contrast to the regime prevailing before the advent of cloud computing—the owner of the information has no idea that the government seeks to obtain confidential information, and therefore does not have any opportunity to invoke limits on the government’s authority or to assert privileges that protect against disclosure of some or all of the information sought by the government,” Pincus wrote.

>> Fenwick & West partner Michael Dicke, head of the firm’s securities enforcement group, was counsel to Joseph Jackson, former CEO of WageWorks Inc., in an SEC action. Jackson did not admit or deny any wrongdoing. “Jackson also agreed to pay a $75,000 penalty and reimburse WageWorks for $1,929,740 representing incentive-based compensation and profits from the sale of WageWorks stock,” the SEC said. The SEC’s investigation was conducted by Matthew Meyerhofer and Mike Foley.

>> Robert Nicholson and Zachary Pfister, a pair of lobbyists at Brownstein Hyatt Farber Schreck LLP, registered as “foreign agents” for Saudi Arabia and Egypt. In disclosures, the two said they would “[f]acilitate meetings with federal government officials either via phone or email” for Saudi Arabia and, for Egypt, “[p]rovide government relations services and strategic counsel on matters before the US Government.”

>> The Washington-based white-collar defense lawyer Thomas V. Sjoblom is representing John DeMarr, a private detective in California who was charged with defrauding hundreds of retail investors out of $11 million in a cryptocurrency scheme. The SEC alleged that DeMarr and Kristijan Krstic, the founder of Start Options and Bitcoiin2Gen, misled investors as they promoted B2G tokens in an unregistered initial coin offering. DeMarr was charged in a parallel action by the U.S. Justice Department. Krstic is represented by  Peter Enrique Quijano, Esa. of Quijano & Ennis P.C.

“The indictment alleges an elaborate scheme in which the defendant conspired to lure unsuspecting investors with fraudulent promises of large returns in the cryptocurrency market, only to divert millions of dollars for his own personal use,” said Nicholas L. McQuaid, the acting head of the Justice Department’s criminal division. “While the technologies and methods are constantly changing, the criminal division’s commitment to aggressively pursuing fraud in all its forms remains unchanged.” 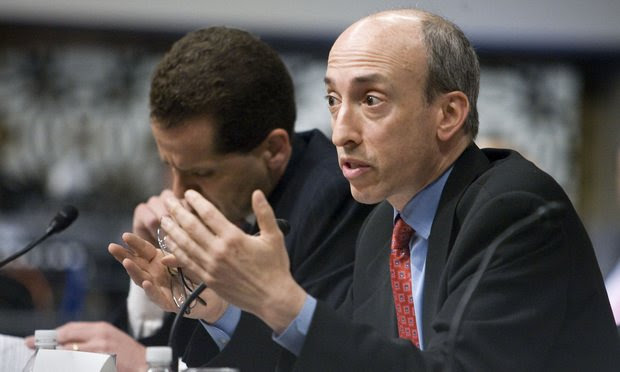 Gensler Faces Big Challenge in Tackling GameStop’s Wild Ride. ”There is broad agreement that the capital markets have been distorted but less consensus on what, if anything, the S.E.C. should do about it.” [NYT] The SEC chair nominee is seen above.

Banks Brace for Tougher Rules Under Biden on Consumer Protection, Fair Lending. “After the 2008 financial crisis, regulatory reform efforts sought to make the system safer. This time, the goal will be to make it fairer.” [WSJ]

DOJ Announces First False Claims Act Settlement with Borrower and Its CEO for PPP Fraud. “Although DOJ has brought over 50 criminal prosecutions for PPP fraud, this is the first civil action, highlighting another tool available to DOJ to address alleged misconduct in connection with PPP loans. Private plaintiffs also may bring lawsuits on behalf of the government under the FCA, and a qui tam relator recently filed a claim under the FCA alleging that a borrower committed PPP fraud. [NYU’s Compliance & Enforcement]

Consumer Financial Protection Bureau, Muzzled Under Trump, Prepares to Renew Tough Industry Oversight. ”The Consumer Financial Protection Bureau, the watchdog created after the 2008 financial meltdown and largely muzzled in the Trump era, is poised to start barking again. The agency will focus first on enforcing legal protections for distressed renters, student borrowers and others facing growing debt that its previous leadership has been lax about imposing during the pandemic.” [The Washington Post] Bloomberg has more here on the CFPB.

Biden’s Candidate for SEC Chairman Is Expected to Be Tough on Companies. ”Gary Gensler, President Biden’s pick to run the Securities and Exchange Commission, is expected to seek higher fines and new disclosure requirements on public companies, lawyers and former regulators say.” [WSJ]

Suspension Was Insufficient Penalty for Ex-Prosecutor With History of ‘Brady’ Violations, Advocates Argue. Bracewell partner Paul Shechtman and Nina Morrison, senior litigation counsel at the Innocence Project, have asked New York’s Appellate Division, Second Department to reconsider its recent decision to suspend a former prosecutor from the practice of law for two years, arguing that the sanction failed to “reflect the full extent of his wrongdoing.” [New York Law Journal] >> After a year and a half as the top aide to FBI Director Christopher Wray, Paul Murphy has returned to King & Spalding as a partner focusing on white collar criminal defense, civil investigations.

“It’s a great national and international platform to practice law. But at the end of the day, a law firm is comprised of lawyers. I think King & Spalding has got great lawyers but also very fine people. They’re the kind of people you’re proud to have as your friends and colleagues,” Murphy said. “King & Spalding is a unique place in that, despite all the growth, we’ve managed to maintain a really collegial culture. It’s very special. So I am happy to be back.” [Daily Report]

>> Kevin Chambers, a leader in the Latham & Watkins litigation and trial practice in Washington, has joined the U.S. Justice Department as a top aide in the deputy attorney general’s office, becoming the latest top partner to leave the firm for the Biden administration, according to a person familiar with the move. Former Latham colleague Nicholas McQuaid was named recently the acting head of the DOJ criminal division.

>> Michael Dawson stepped down as a managing director of Promontory Financial Group to become a partner in Wilmer, Cutler, Pickering, Hale and Dorr‘s securities and financial services group. “Michael is a builder and leader and our clients will benefit from his experience in providing practical guidance to both traditional financial services and FinTech companies,” said Wilmer Hale managing partner Robert Novick. His arrival bolsters the firm’s financial group following the recent departures of Reginald Brown and other partners to Kirkland & Ellis.

>> ”Acting SEC Chairwoman Allison Herren Lee said on Monday that professor John Coates would serve as the director of the Division of Corporation Finance on an acting basis, and tapped Satyam Khanna, a New York University fellow and member of the Biden transition team, for the newly created position of senior policy advisor on climate and environmental, social, and corporate governance (ESG),” Reuters reports.

>> William McSwain, the former U.S. attorney for the Eastern District of Pennsylvania appointed by former President Donald Trump, stepped into his new role as a partner at Duane Morris, based in the firm’s Philadelphia office, on Monday. Prior to serving as U.S. attorney, McSwain was a partner with Drinker Biddle & Reath, now Faegre Drinker Biddle & Reath, where he focused on white-collar criminal matters and complex business litigation.

>> Michael Schrier, a former special counsel at Duane Morris, has joined Husch Blackwell as a partner in the firm’s government contracts practice. “Michael is able to approach legal challenges with a very broad perspective that our clients will appreciate,” said Brian Waagner, leader of Husch Blackwell’s government contracts practice group. “His practice spans multiple disciplines, and combined with his labor-side experience, he brings a unique skill set to our team.”