The Utah Supreme Court was inundated with comments from those who supported and opposed its proposed emergency diploma privilege and ultimately decided to move forward with the program, making it the first jurisdiction to let law grads skip the exam.

Utah has officially become the first jurisdiction to allow aspiring lawyers to bypass the bar exam and become licensed amid the COVID-19 pandemic.

The Utah Supreme Court on Tuesday issued an order adopting an emergency diploma privilege for recent law graduates who meet a lengthy list of criteria, including that they complete 360 hours of legal work under the supervision of an experienced attorney licensed in the state. Qualifying law graduates will become full members of the Utah bar if they complete all the requirements by the end of 2020, without taking the bar exam. Utah has about 200 students from its two law schools graduating in May.

“I admire the courage, compassion and leadership of our justices,” tweeted Brigham Young University law dean Gordon Smith after the order was issued. “Well done!”

The move demonstrates the enormous upheaval that the pandemic has created in legal education, as other jurisdictions grapple with how to deal with the nearly 40,000 law graduates entering the upended job market next month.

Graduating law students across the country have called on courts and bar exam authorities to embrace an emergency diploma privilege on the grounds that it’s unclear when it will be feasible and safe to administer the bar exam, and that licensing delays will derail their ability to launch their careers. An emergency diploma privilege was one of the alternative approaches endorsed by a group of legal academics in March, who urged authorities to make swift decisions about the fate of the July bar in part to alleviate the anxiety of graduating law students. But the National Conference of Bar Examiners, which develops the test, this month cautioned jurisdictions that abandoning the bar exam would put the public at risk by opening the profession to unqualified lawyers.

Meanwhile, a growing number of jurisdictions have announced postponements or cancellations of the July bar exam, with many opting to reschedule the test in September—when the national conference is offering two alternative dates. Some jurisdictions, including New Jersey, Georgia and Arizona, are also extending supervised practice rules that will allow recent graduates to work under the watch of a licensed attorney while they await a chance to sit for the bar.

Utah’s path to adopting an emergency diploma privilege highlights how passionate people feel about the bar exam—or about skipping it. The court circulated its proposed order on April 9, giving the public a week to submit comments. It received more than 500 comments in that time.

Unsurprisingly, many law students wrote in favor of the alternative licensing route on the grounds that these are unprecedented times, and many practicing attorneys wrote that they are concerned about the removal of the bar exam as a safeguard for the public.

But ultimately, the state high court felt that it needed to establish a route to licensure that offered law graduates some certainty, wrote Chief Justice Matthew Durrant in a press release that accompanied Tuesday’s order.

“Because of the crisis, not only could we not guarantee that Utah could offer the bar examination safely, we could not tell applicants when they should start to invest the time and money to prepare for the exam,” Durrant said. “We hope that the bar exam will in some form become available sooner than is now anticipated, but at present, the other solutions we have examined have an unacceptable level of uncertainty for applicants and employers.”

University of Utah law dean Elizabeth Kronk Warner and BYU’s Smith both advocated for the adoption of the emergency diploma privilege, coupled with a period of supervised practice.

In order to qualify for Utah’s emergency diploma privilege, candidates must have graduated from a law school with a first-time bar pass rate of 86% or higher in 2019. (Both of the state’s law schools meet that standard, as each posted a 90% first-time pass rate last year.) Only those who graduated from law school between May 2019 and June 2020 are eligible, and they must not have previously sat for the bar.

They also must have been registered for Utah’s July bar exam by April 1—a provision that will prevent an influx of applicants from other jurisdictions who are looking to avoid the bar exam. They will have until the end of December to complete the required 360 hours of supervised practice. They will then be fully admitted into the Utah bar.

“In granting the privilege, the Utah Supreme Court recognized the impossibility of offering a July 2020 exam, as well as the importance of putting new lawyers to work helping those most impacted by the pandemic, providing practicing lawyers help, and giving new graduates the certainty and financial stability that they and their families require,” wrote Kronk Warner in a message to students.

It remains to be seen whether Utah’s move will prompt other jurisdictions to embrace an emergency diploma privilege. Wisconsin has long maintained a diploma privilege system that allows graduates of the state’s two American Bar Association-accredited law schools to be admitted to practice without taking the exam.

Like Utah, however, Wisconsin produces relatively few new lawyers annually. Just 256 people sat for the July 2018 bar exam there, compared with 8,071 in California and 9,679 in New York. Thus, emergency diploma privileges and expanded supervised practice provisions likely would be more difficult to implement in those larger jurisdictions. 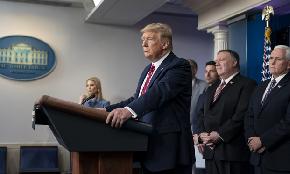 In the new filing, Jessica Denson, who is represented by Bowles & Johnson, Ballard Spahr and the advocacy group United to Protect Democracy, asked for a judgment declaring the NDA null, void and unenforceable. Law Schools Have an 'Obligation' to Help End Racism and Injustice, Deans Argue

Law schools are hosting open forums for students and staff to discuss recent police killings of minorities and systemic inequality, as well as workshops on policing and other relevant legal issues.