The Silicon Valley titans have been disputing for nine years whether Google violated Oracle's copyright by copying Java application programming interfaces into its Android operating system.

The U.S. Supreme Court just doesn’t seem to know what to make of the titanic copyright clash between Oracle Corp. and Google LLC over the Java application programming interfaces, or APIs.

The high court asked the Solicitor General’s Office to weigh in for a second time on Google v. Oracle, which Google calls “the copyright case of the century.” The justices first asked for the SG’s views when the only question before the court was the copyrightability of the APIs, 11,500 lines of code that form a structure for basic programming functions. The SG found them copyrightable, and the court declined to take up the case at that time.

This time Google is asking the court to review both copyrightability and whether Google’s copying of the APIs into its Android operating system was a fair use. A jury said it was, but the U.S. Court of Appeals for the Federal Circuit ruled it was not a fair use as a matter of law. Google’s Arguments on Copyright Fall Flat at the Supreme Court

Google asks the Supreme Court to walk away from the Founding Fathers' wisdom, congressional intent and the court’s own precedent to excuse free-riding on Oracle’s copyrighted work to build a massive commercial enterprise. 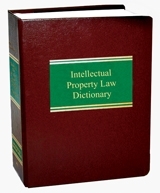 This book contains 6 sections explaining the meaning and legal background of terms used in copyright, trademark, patent, nanotechnology and trade secrets, both in the U....