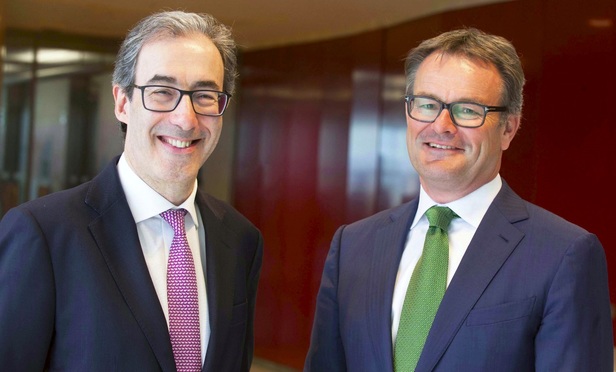 Profit before tax dipped 1.4%  to £562m, with the firm attributing this to IFRS accounting provisions for pensions and property costs, saying that excluding these costs, profit remained flat.

Global managing partner Andrew Ballheimer (pictured alongside senior partner Wim Dejonghe) said London was a particularly strong contributor in the first half of 2015-16, before uncertainty ahead of the then impending European Union (EU) referendum impacted on activity levels. The Middle East, Greater China, Luxembourg, Spain, Singapore and Australia all put in good performances.

He highlighted the contribution of the firm’s disputes and M&A practices, as well as the boost alternative delivery models such as Peerpoint gave the firm’s bottom line.

Peerpoint grew by 75% to 140 consultants following its Asia-Pacific launch, while A&O’s Belfast legal services centre saw its number of legal professionals rise by more than 20%.

Ballheimer said: “The results are solid – the markets have been very mixed so I’m pretty pleased to have that outcome. Our model is a steady hedged business for year-on-year growth.”

He added of 2015-16: “On the one hand we had an M&A boom in developed markets during calendar 2015, while on the other hand clients also had to contend with a slowdown in China, the collapse of oil and commodity prices and rising uncertainty over the UK’s referendum on whether to leave the European Union.”

He highlighted the fact 73% of the firm’s 2015-16 revenue was driven by cross-border work involving two or more offices, as a demonstration of the firm’s natural hedge.

According to A&O, the firm advised on more than 1,500 deals globally across M&A, debt, equity capital markets and projects. Transactional highlights during 2015-16 included roles for Coca-Cola Iberian Partners, VimpelCom, Carlyle and Visa Europe.

The increase in PEP came on the back of a 7% rise in pre-tax profit to £570m, up from £532m in 2013-14, with the results representing a fifth consecutive year of growth in both revenue and pre-tax profit.

Profit margin has also increased in recent years, climbing from 40% in 2010-11 to 44% in the most recent financial year.

Commenting on the uncertainty caused by the UK’s vote to leave the EU, Ballheimer said: “The outlook is obviously more uncertain, but our business isn’t overly well concentrated by either geography or practice area and because our clients are facing legal uncertainty and will need us to help them through it, I think our business is resilient. Our priorities for investment are still the same.”

Georgina Stanley is the editor of Legal Week. She joined the magazine in October 2005 and has since written news, analysis and commentary about a range of leading UK and international commercial law firms, as well as trends in the profession. Before joining Legal Week she worked at several business titles, starting her journalism career at Euromoney.