"The court recognizes that postponement of the bar examination may impact employment prospects, delay incomes, and otherwise impair the livelihoods of persons who recently have graduated from law school," Supreme Court Clerk Jorge Navarrete wrote.

Additionally, the court ordered that the score needed to pass the test—a figure known as the cut score—be permanently reduced from 145 to 139. The previous cut score was the second highest in the nation and regularly resulted in thousands of law school graduates failing a test that they would have passed under other states’ scoring rules. 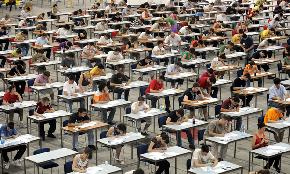 An administrative order accompanying the letter to the bar reiterates the court's decision to hold an online bar exam on Oct. 5 and 6 and to permanently lower the cut score to 139 starting with that test. How Much Did Attorneys General Get for Former ITT Tech Students in Your State Under $330M Deal? The COVID Pandemic Could Kill the Partner Office

As remote work becomes the norm, law firms are rethinking how much space a private office really requires.