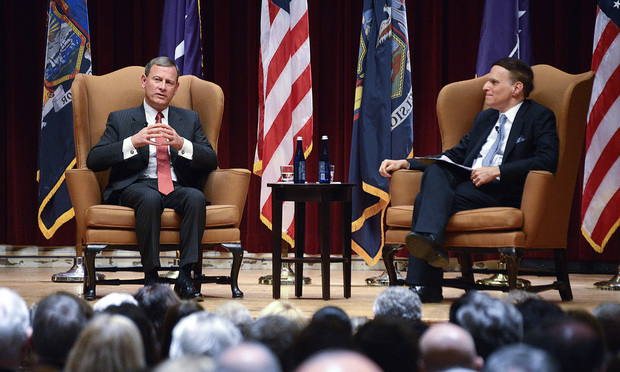 Kozinski Harassment Inquiry Is Routed to the Second Circuit

Chief Justice John Roberts has called on Chief Judge Robert Katzmann of the U.S. Court of Appeals for the Second Circuit to head up an inquiry into sexual harassment complaints against Ninth Circuit Judge Alex Kozinski.

Roberts’ letter to Katzmann announcing the move was made public Friday afternoon.

Chief Judge Sidney Thomas of the U.S. Court of Appeals for the Ninth Circuit issued an order Thursday initiating a complaint against Kozinski, a little less than a week after The Washington Post reported that six former clerks or externs at the court accused Kozinski of asking them to view pornography or subjected them to inappropriate comments. More women have come forward since with similar allegations.

Under rules adopted in 2008 by the Judicial Conference of the United States, the policymaking body of the federal courts, chief judges have discretion to seek an informal resolution if they have probable cause to believe misconduct has occurred. A special committee may be formed to investigate if that process fails or proves unfeasible.

According to the rules: “When a chief judge has information constituting reasonable grounds for inquiry into whether a covered judge has engaged in misconduct or has a disability, the chief judge may conduct an inquiry, as he or she deems appropriate, into the accuracy of the information even if no related complaint has been filed.”

The rules allow in “exceptional circumstances” for chief judges to ask the chief justice to transfer a proceeding and Thomas made that request when initiating the complaint.

In Friday’s letter, Roberts wrote: “I have selected the Judicial Council of the United States Court of Appeals for the Second Circuit to accept the transfer and to exercise the powers of a judicial council with respect to the identified complaint and any pending or new complaints relating to the same subject matter.”

These sexual misconduct allegations are not the first time that Kozinski has been at the center of controversy involving computers or pornography. In 2000, Kozinski, then the chief judge of the Ninth Circuit, and some colleagues protested after discovering that the Judicial Conference had installed software to monitor computers use by the then-30,000 federal court employees. The monitoring revealed some employees were using court computers to download pornography.

Kozinski and others wrote letters to the head of the Administrative Office of the U.S. Courts objecting. Kozinski also wrote a legal memorandum suggesting that the practice violated privacy laws and disabled the software. The head of the administrative office filed a complaint against Kozinski for disabling the system, but that complaint was dismissed.

In 2008, the Los Angeles Times reported that Kozinski maintained a publicly accessible website that contained sexually explicit photos and videos. The judge told the paper he did not realize the site was publicly available and he kept it as his private storage. While he said some of the material was inappropriate, he said some was “funny.”

At Kozinski’s request, the Ninth Circuit initiated a misconduct inquiry related to the website. In that case, the formal investigation was referred to the Third Circuit’s judicial council by the chief justice. The Third Circuit ultimately “admonished” Kozinski for “conduct exhibiting poor judgment with respect to this material created a public controversy that can reasonably be seen as having resulted in embarrassment to the institution of the federal judiciary.”

Kozinski, 67, has served on the Ninth Circuit since his appointment by President Ronald Reagan in 1985. He was chief judge from November 2007 to December 2014.