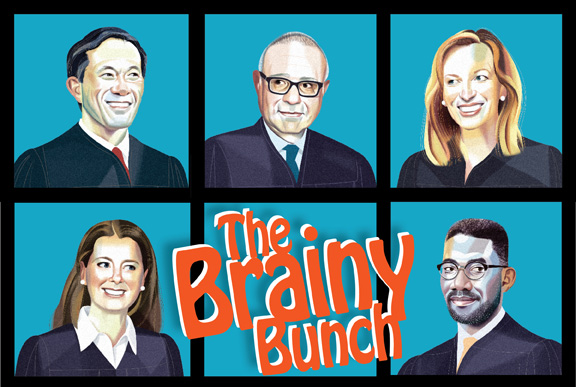 Who's who on the Patent Trial and Appeal Board—a sophisticated bench that's revolutionizing patent litigation.

Practitioners describe an engaged bench populated by lawyer-scientists eager to drill down into the nitty-gritty of inventions and the art that preceded it. “You can’t wave your hand, gloss over weaknesses in a case and assume they won’t catch them. They will,” says Erika Arner, a partner at Finnegan, Henderson, Farabow, Garrett & Dunner who filed the first ever PTAB petition in 2012 and has been involved in dozens since.

“They’re going to ask the kinds of questions that make you feel like the witness that’s being deposed,” says Robert Steinberg, chairman of Latham & Watkins’ PTAB practice.

It can be unpredictable, too, as might be expected of a board developing rules and precedents almost from scratch. Oblon partner Scott McKeown was awestruck when two PTAB judges with electrical engineering degrees began examining an inventor about his computer code. “In district court, you never would see a judge asking to be walked through code, line by line,” says McKeown.

Kamholz strongly encourages practitioners to hold moot courts before appearing. “Sometimes we were relentless,” he says. “It’s one of the hottest benches going.”

The 2011 American Invents Act created a faster, cheaper alternative to district court litigation of patent validity. The mechanism has proven hugely popular with companies facing claims of patent infringement, though some patent holders say that’s because the board has been too eager to invalidate patent claims.

Randall Rader, the former chief judge of the U.S. Court of Appeals for the Federal Circuit, famously described the board as “a death squad” for patents, though to date the Federal Circuit has shown plenty of deference to PTAB decisions.

The PTAB had received 3,500 petitions in AIA proceedings through June, and 150 to 170 continue to be filed each month. The board has held 466 trials, with 318 (68 percent) ending in the cancellation of all instituted claims. By statute, it operates on a swift time frame: The AIA mandated that the board must make a decision on whether to institute review within six months of receiving a petition and issue final decisions within one year after the decision to review.

Following passage of the AIA, the board grew from fewer than 100 judges to about 230 today. The work includes traditional ex parte appeals, AIA proceedings and management/administration, with many judges doing some of each. The PTO does not release information about its judges, But data compiled from Docket Alarm, a legal research and analytics website developed by IP litigator Michael Sander, indicates that about 80 judges have done the heavy lifting so far on AIA post-grant proceedings.