"Right now, because there are no clear regulations on these activities, companies are afraid," noted the head of one law school's space law center.

By Caroline Spiezio | January 22, 2018 at 02:45 PM | The original version of this story was published on Corporate Counsel
X

A vacation to the Moon may no longer be a far-off pipe dream for Americans (at least those with plenty of money in the bank). Elon Musk’s Space Exploration Technologies Corp., known as SpaceX, has previously announced plans to prepare to send private citizens into space by late 2018. And citizens of Earth—including the legal community—are wondering what comes next.

This is because, at the moment, it’s not completely clear which commercial laws govern space or what regulations companies and their in-house attorneys have to follow there. Most of the space law that does exist deals with government and military activities, not commercial activity. And the laws that do address businesses in space mostly deal with satellites, not full-fledged space tourism or, say, asteroid mining. 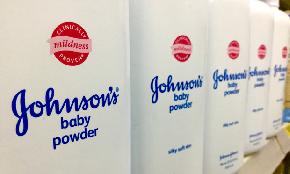 Plaintiffs lawyers have told a New Jersey federal judge they want to depose a Johnson & Johnson representative to address why the company lost or destroyed talcum powder samples that they could have tested in cases alleging women got ovarian cancer from prolonged use of its baby powder.