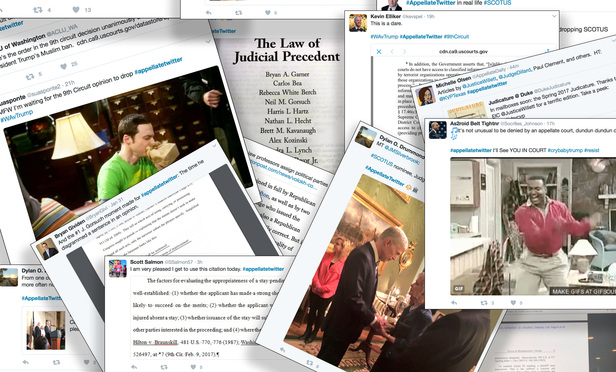 When people across the country listened to the arguments regarding Trump's immigration ban live on Feb. 7 from the U.S. Court of Appeals for the Ninth Circuit and again Thursday when the decision came out, #appellatetwitter had its moment.

Sean Marotta, a Hogan Lovells senior associate, was so excited to talk about Twitter on Thursday night that he took a reporter’s call while at the hospital. His wife was in labor.
“I have my iPad and we’re waiting for medicine to kick in,” he said, noting that his wife, Marne, and soon-to-come baby boy were at ease. “Also the Ninth Circuit order is a big deal.”
The U.S. Court of Appeals for the Ninth Circuit in California had ruled around 6 p.m. Thursday to keep blocked the Trump administration’s immigration executive order. The community of appellate lawyers on Twitter, @smmarotta included, lit up.
That community has coalesced around a single hashtag, #appellatetwitter, over the past year, chatting casually about brief-writing, judiciary antics and the mundanities of the practice of law.
When people across the country listened to the Ninth Circuit arguments live Feb. 7, and again last Thursday, with the decision, #appellatetwitter had its moment.

Ok #AppellateTwitter. Someone help us out: what’s at issue in CA9 appeal: TRO itself or denial of stay on TRO? #99problemsandthisis1