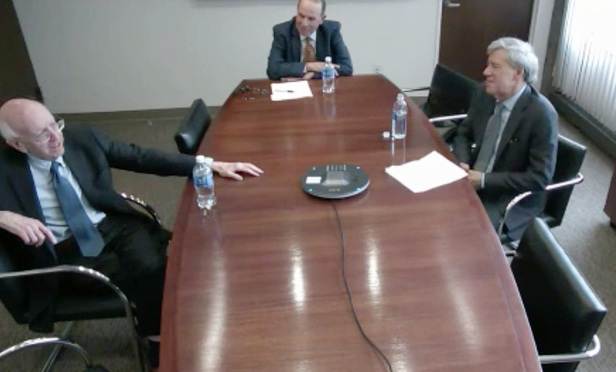 Originally published on The National Law Journal. All rights reserved. This material may not be published, broadcast, rewritten, or redistributed. For…

Originally published on The National Law Journal. All rights reserved. This material may not be published, broadcast, rewritten, or redistributed.

For months, rumors have circulated about Judge Richard Posner of the U.S. Court of Appeals for the Seventh Circuit unloading on Chief Justice John Roberts Jr. and the late Supreme Court Justice Antonin Scalia in a conversation before a small audience of First Amendment advocates.

A video of the conversation, which took place in May, has just been posted on YouTube, and the rumors were correct: The prominent and prolific Posner railed against several “stupid” decisions by Roberts, and called the chief justice a “terrible manager” of the federal judiciary. For good measure, Posner said that Scalia’s 2008 gun rights decision D.C. v. Heller was “a terrible opinion” and that his support for the right to burn the American flag was “very silly.”

The 1989 flag-burning decision that Scalia supported, Texas v. Johnson, was in the news Tuesday because of a tweet by President-elect Donald Trump suggesting that flag-burners should be jailed and stripped of their citizenship.

Posner said Scalia was “very proud of the decision,” which ran contrary to Scalia’s personal preferences. But Posner said Scalia’s vote in favor of flag-burning was silly because “he styled himself as an originalist, but there was no reason to think” that 18th century Americans would have viewed flag-burning as a form of expression protected by the First Amendment.

The Chicago-based judge, outspoken author of dozens of books about the law and other topics, said the Heller decision written by Scalia was “full of historical rubbish” aimed at justifying the individual right to bear arms. At a practical level, Posner said, the ruling federalized what had been an area of the law left to the states, which had different reasons for favoring or opposing rights.

Posner made his comments in a dialogue with University of Chicago Law School professor Geoffrey Stone before a “First Amendment Salon” session organized by scholar Ron Collins to discuss Posner’s First Amendment views. It was broadcast from Chicago to participants in New York and Washington, D.C., but the video was not available until this week.

To the surprise of some who attended, Posner’s comments went well beyond the First Amendment and veered into other areas including Roberts’ roles as a chief justice. At one point Posner acknowledged he was “beating up on Roberts.”

Roberts’ 2014 First Amendment ruling in McCullen v. Coakley, which struck down a buffer zone around Massachusetts abortion clinics was “such a stupid decision,” Posner said. He added that the case itself involved a “grandmotherly type” who wanted to counsel clinic clients against abortion. But once the decision came down, he said, “within 24 hours, the shrieking fetus protectors were back.” It was “completely phony,” Posner added, for Roberts to depict public sidewalks as hallowed forums where “people exchange ideas.” Nowadays, Posner said, when someone approaches a pedestrian to talk politics, “you run.”

Posner also targeted Roberts’ dissent in Obergefell v. Hodges, the 2015 same-sex marriage case. It was “ridiculous,” Posner said, for Roberts to base his dissent on flawed information about the marital and sexual practices of long-ago civilizations “as evidence that same-sex marriage should be forbidden.”

As for Roberts’ “terrible” management of the Supreme Court and federal judiciary as chief justice, Posner rattled off several criticisms: it takes five years for Supreme Court decisions to be printed in the official United States Reports; Roberts ordered the court’s bronze front doors to be closed for security reasons, offending his colleagues; the Federal Judicial Center does not have enough academics to develop training curricula for new judges; and the Supreme Court is deciding half as many cases as it did in the 1960s, with twice as many law clerks.

On the latter complaint, Posner said the high court, with its diminished docket, should expand argument time to give lawyers a chance to make their case more fully. Instead, Posner said, the court keeps arguments to a half-hour for each side, and the justices “babble incessantly during oral argument.”