Mary E. Storella, formerly vice president and senior counsel, corporate transactions, at Celgene Corp., joined Lowenstein Sandler in Roseland as vice chair of the life sciences group and head of life sciences transactions. She will focus on mergers and acquisitions, early- and late-stage collaborations, licenses, options, co-development and co-commercialization collaborations, clinical collaborations, and diagnostic collaborations in the pharmaceutical, biotech and other industries, the firm said. At Celgene she led and supported deals including the company’s $67 billion sale to Bristol Myers Squibb, its $13.4 billion divestiture of Otezla to Amgen, its $9 billion acquisition of Juno Therapeutics, and its $300 million acquisition of Delinia Inc., the release noted. Storella previously worked as an attorney and executive director of business development at Merck & Co. Inc., where she headed a transaction team handling, among other deals, Merck’s $14.2 billion divestiture of its consumer care business to Bayer. “Now more than ever, life sciences and biotech companies are at the forefront of developing innovative solutions in a rapidly changing landscape,” Storella said in a statement. Michael J. Lerner, chair of Lowenstein’s life sciences group, added that Storella’s “extensive in-house experience gives her a 360-degree perspective on not only licensing, partnering, and acquisitions, but also on the tax, corporate governance, and business development impacts of these and other complex transactions, and it adds to our already deep, industry-focused transactional capabilities.” Storella earned her J.D. from Pace University Law School and her B.A. from the University of North Carolina at Chapel Hill. 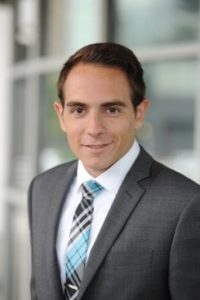 Riker Danzig Scherer Hyland & Perretti in Morristown brought on Agostino A. Zammiello as an associate in the bankruptcy and reorganization group. Zammiello received his J.D. from Seton Hall University School of Law in 2016 and his B.A. from Seton Hall University in 2012. Following law school, Zammiello clerked for New Jersey Superior Court Judge Louis Sceusi. Prior to joining Riker Danzig, Zammiello was an associate at Fitzpatrick & Hunt, Pagano, Aubert in New York City. He currently serves as a pro bono attorney for the Volunteer Lawyers for the Arts in New York City. He also is a volunteer for the Special Olympics of New Jersey.