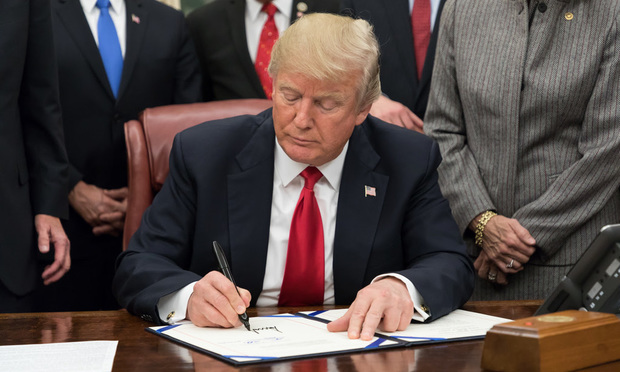 "The conviction that the tweets were not law is rooted in beliefs about what law does and should look like and how it is and should be made," the Harvard Law Review article said.

The @realdonaldtrump Twitter account has caused headaches for companies and federal agencies alike, keeping corporate public relations teams on alert for a negative social media shout-out and forcing government lawyers to address the consequences the president’s tweets can have on pending court cases.

President Donald Trump’s tweets are official statements, according to the U.S. Justice Department. But do Trump’s tweets, fired off at all hours, amount to orders carrying the weight of law? A new Harvard Law Review study concludes—as many scholars have opined in recent weeks—they do not.

The Harvard article, focused on Trump tweets from July that purported to ban transgender people from serving in the military, takes a deep dive into presidential communication. The piece looks at presidential intent in messaging, tone and language.

….Transgender individuals to serve in any capacity in the U.S. Military. Our military must be focused on decisive and overwhelming…..

“The conviction that the tweets were not law is rooted in beliefs about what law does and should look like and how it is and should be made,” according to the article, which was unsigned and published online last week.

“A complete account of why the memorandum was legally effective but the tweets were not requires grappling with our commitments to values like accountability and to ideals like the rule of law,” the Harvard article said.

Among other things, the Harvard article looked at how Trump’s transgender directive was issued. From the article: