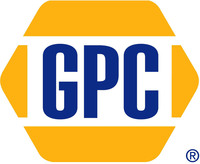 Genuine Parts Company also announced its Board of Directors appointed Juliette W. Pryor as a new independent director of the Company. Ms. Pryor is General Counsel and Corporate Secretary of Albertsons Companies, the second largest grocer in the United States, which operates over 2,200 stores and includes a network of 22 distribution centers and 20 manufacturing facilities in its operations. At Albertsons Cos., Ms. Pryor is responsible for the company's legal, compliance and government affairs functions. Previously, Ms. Pryor served in similar leadership roles at Cox Enterprises, US Foods and e.spire Communications and was also an attorney in private practice with Skadden Arps.

Paul Donahue, Chairman and Chief Executive Officer of Genuine Parts Company, stated, "We are pleased to welcome Ms. Pryor as our newest director. Through her 25-year career, Juliette has established herself as a talented executive with deep knowledge in corporate governance, regulatory compliance, audit and public policy. In addition, we look to draw on her considerable experience in areas such as human resources and diversity and inclusion. Juliette's wealth of expertise in retail, distribution and automotive services combined with her impressive business background make her a valuable addition to our board. We look forward to her contributions as a director of the Company."

Founded in 1928, Genuine Parts Company is a global service organization engaged in the distribution of automotive and industrial replacement parts. The Company's Automotive Parts Group distributes automotive replacement parts in the U.S., Canada, Mexico, Australasia, France, the U.K., Germany, Poland, the Netherlands and Belgium. The Company's Industrial Parts Group distributes industrial replacement parts in the U.S., Canada, Mexico and Australasia. In total, the Company serves its global customers from an extensive network of more than 10,000 locations in 14 countries.  Further information is available at www.genpt.com.