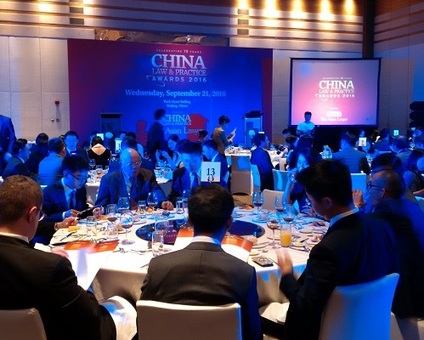 Baker & McKenzie, King & Wood Mallesons (KWM) and Clifford Chance (CC) were among the big winners at the China Law & Practice Awards 2016, which this year celebrated their 10th anniversary at a packed event in Beijing.

The event, hosted yesterday (21 September) at the Park Hyatt Beijing by Legal Week sister title China Law & Practice, was attended by nearly 200 legal professionals, with the winners selected from almost 1,000 nominations, the highest on record.

Winners of the most prestigious prizes included Zhong Lun Law Firm and Baker & McKenzie, which took home the China Firm of the Year and International Firm of the Year awards respectively, and Han Kun Law Offices, which was named Most Innovative Firm of the Year for its work in cutting-edge technology, media, telecoms and venture capital deals.

To mark the 10th anniversary, a special award was handed to KWM as Firm of the Decade, in recognition of its growth and international success achieved in parallel with China’s rise to the top of the global stage during the past 10 years.

UK firms recognised at the event included CC, which took two international awards for projects and infrastructure, and capital markets; Allen & Overy, for its aviation work; Eversheds, which took the International Employment Firm honour; and Linklaters, which was named International Competition Firm of the Year.

The Lifetime Achievement award went to Professor Jiang Ping, the former president of China University of Political Science and Law, for his achievements in legal reform and advocacy of the rule of law.

Debt and Equity-linked Deal of the Year: Greentown China’s consent, exchange and new bond offering Davis Polk & Wardwell Jingtian & Gongcheng Maples and Calder T&C Law Firm White & Case This three-in-one deal combined consent from Greentown’s renminbi and USD bondholders, a concurrent offer to exchange the USD notes and a new money issuance of $500m. The triple transaction was executed within a single timetable and was the first of its kind on the Hong Kong stock exchange.

Equity Deal of the Year: Focus Media $7bn backdoor listing Fangda Partners Jingtian & Gongcheng Focus Media Holding’s Rmb45.7bn backdoor listing on the Shenzhen Stock Exchange through Hedy Holding, which followed its 2013 delisting from the US, represented the first relisting of a NASDAQ-listed company on the A-share market. This reverse merger is at the forefront of a significant privatisation trend involving the US and Chinese markets.

Finance Deal of the Year: Bank of Dalian $2.3bn restructuring financing Guantao Law Firm Haiwen & Partners Bank of Dalian, which was classified as high risk in 2014, brought on board China Orient Asset Management as a strategic investor to acquire its assets. The deal required substantial M&A, finance, restructuring and tax work in light of the necessary due diligence, complicated batching and disposal of risky assets, heavy negotiation and calculation of losses before enterprise income tax payments.

Real Estate and Construction Deal of the Year: Shanghai Disney Resort Baker & McKenzie Guantao Law Firm Jin Mao Partners Paul Weiss Rifkind Wharton & Garrison Zhong Lun Law Firm The opening of the Shanghai Disney Park & Resort in June 2016 was the result of more than 10 years’ planning and structuring. Disney’s joint venture with Shanghai Shendi Group for this project was a milestone for foreign cultural import, as well as the consumer market in China. It was the first theme park project of international standard and required complex legal considerations in real estate, construction, M&A, IP and employment.