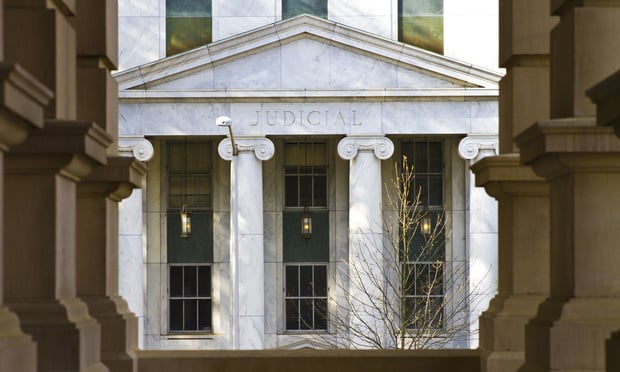 The American Tort Reform Foundation placed the Georgia Supreme Court on a "Watch List" in its annual "Judicial Hellhole" report on jurisdictions "where judges in civil cases systematically apply laws and court procedures in an unfair and unbalanced manner, generally to the disadvantage of defendants."

Recent rulings by Georgia appellate courts and big jury verdicts for plaintiffs risk the state getting a reputation as hotter than Hades for civil defendants, a tort reform group stated Tuesday.

The American Tort Reform Foundation placed the Georgia Supreme Court on a “Watch List” in its annual “Judicial Hellhole” report on jurisdictions “where judges in civil cases systematically apply laws and court procedures in an unfair and unbalanced manner, generally to the disadvantage of defendants.”

The group claimed Georgia courts high and low “have aggressively expanded liability for property owners.” It blasted the Georgia Supreme Court for its decision reinstating a verdict in a case against Six Flags Over Georgia, saying the justices ”unanimously held that defendants can be held liable for harm to a customer occurring off the premises if criminal activity was allegedly ‘foreseeable.’”

The report said the plaintiff in the case was brutally attacked by assailants “with no
connection to the park at a bus stop outside” of Six Flags.

In her decision for the court in June, Justice Britt Grant noted that because the attack began while both the plaintiff and the assailants “were on Six Flags property, Six Flags’ liability is not extinguished simply because [the plaintiff] stepped outside the property’s boundaries while attempting to distance himself from his attackers.” Grant—listed by President Donald Trump as one of his favorites for any open U.S. high court seat—directed the trial judge to hold a new trial on damages.

The group also complained about “runaway jury verdicts,” such as a $150 million tab against the maker of a Jeep Grand Cherokee that exploded after an accident, killing a child. That case is on appeal, “[s]o now it’s up to the Georgia Supreme Court to restore sanity.”

A spokeswoman said the state Supreme Court declined to comment on the report. A spokeswoman for Gov. Nathan Deal, who has appointed four of the nine high court members, did not respond to a request for comment.

Bill Clark of the Georgia Trial Lawyers Association said the tort reform group’s report grossly underrepresented ”the magnitude of both the defendants’ wrongdoing and the harm that such wrongdoing caused to the plaintiffs in each of the cases.”

Clark noted how often Georgia ranks at the top on lists of states in which to do business, with officials citing a stable legal and regulatory system as a factor.

“If a bad civil justice system is bad for business, then how can Georgia be the No. 1 state in the country in which to do business in the country?” he asked.

Nationally, a bevy of medical malpractice decisions helped propel Florida to the No. 1 spot in “Judicial Hellholes” report this year.

The Tuesday report cited four Florida Supreme Court rulings in medical malpractice lawsuits among the primary reasons for ranking it the least business-friendly courts in the nation. Other top venues included those in California, New York, Pennsylvania and New Jersey.

“This year, thanks to a state high court majority’s barely contained contempt for the policy-making authority of the legislative and executive branches of government, and a notoriously aggressive and sometimes lawless plaintiffs’ bar, Florida earns the ignominious No. 1 ranking among eight Judicial Hellholes, even as authorities have begun to crack down on some of the lawsuit industry’s most obviously fraudulent rackets,” Tiger Joyce, the tort reform group’s president, said in a statement.

“The authors of this report seem to think that our Seventh Amendment right to seek justice in court is something to be condemned. But that right is protected by the Constitution, just like their right to trot out this same stunt every year in an effort to help corporations avoid  accountability.” 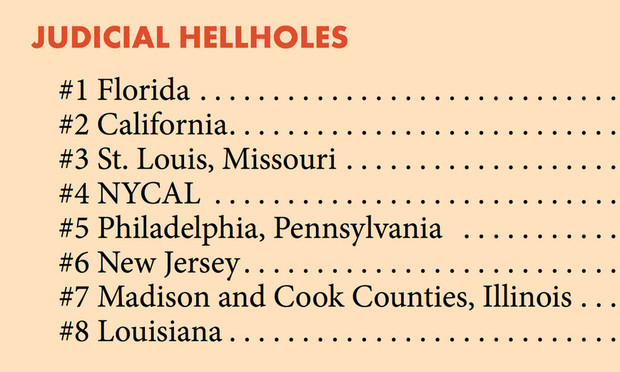 Here’s a look at some of the eight venues that made the list:

According to the report, Florida Supreme Court’s medical malpractice cases appeared to disregard the intent of the state’s legislature. The first decision granted patients access to medical records. Two other decisions pushed back against limits on attorney fees and damages. The court also upheld the privacy rights of patients.

Fort Lauderdale plaintiffs lawyer Scott Schlesinger chastised the report as “fiction” and “meaningless.” He said it’s harder than ever for plaintiffs to get compensated for malpractice committed by their doctors.

“Medical care is pretty much worse than it’s ever been and more dangerous than ever, but nobody wants to be held accountable,” said Schlesinger, of Schlesinger Law Offices. “The powers that be are able to ram through special interest legislation, and it’s the neutral courts that say, wait, this is unfair, or unconstitutional or unlawful legislation.”

The report also noted recent crackdowns on insurance fraud among Florida’s plaintiffs’ bar, some of which have landed plea agreements. And it referenced $9.2 million in sanctions against two Jacksonville plaintiffs firms  for “unprofessional conduct” in tobacco cases.

“Our state has a vibrant justice system that is working to keep Floridians safe and deter insurance companies and big corporations from taking advantage of people and small businesses,” wrote Florida Justice Association spokesman Ryan Banfill. “That’s good for consumers and for business, too.”

The report cited California’s Private Attorneys General Act and public nuisance law as among the reasons the state ranked No. 2. In particular, the report mentioned an appeals court decision upholding liability in a $1.15 billion lead paint judgment.

The report acknowledged some defense wins in California, both involving alleged links between Johnson & Johnson’s baby powder and ovarian cancer and mesothelioma. And it praised the U.S. Supreme Court’s reversal of the U.S. Court of Appeals for the Ninth Circuit’s 2016 ruling in Bristol-Myers Squibb v. Superior Court.

“The good news is the U.S. Supreme Court in June reversed a California high court decision that we criticized in last year’s report,” Joyce said. “Had it been allowed to stand, California’s courthouse doors would have been thrown open even wider to out-of-state plaintiffs suing out-of-state defendants over alleged out-of-state injuries.

In New York, the report focused on the city’s asbestos docket, which ranked No. 4 due to a case management order issued this year that allowed claimants to pursue punitive damages.

Joyce called it “a great disappointment for defendants.”

St. Louis topped the list last year but moved to No. 3 after the governor signed legislation designed to rein in large verdicts based on what tort reformers called “junk science.” Juries in St. Louis have awarded double-digit awards against Johnson & Johnson over baby powder. The report cited those reforms, Bristol-Myers and an appeals court’s reversal of a $72 million talc verdict as reasons for St. Louis to drop in rank.

The Philadelphia Court of Common Pleas ranked No. 5 due to a surge of new lawsuits and big verdicts particularly involving pelvic mesh, antipsychotic drug Risperdal and blood thinner Xarelto. The most recent was the first Xarelto trial in Philadelphia that ended in a $27.8 million verdict on Tuesday.

The state ranked No. 6, primarily due to an appeals court ruling reviving more than 2,000 lawsuits over acne drug Accutane that had been dismissed based on scientific experts.

The report also flagged several venues to watch out for, such as Georgia, for its “growing list of outrageous verdicts.” It also chastised the Connecticut Supreme Court for upholding a $41.7 million award against a private school after a student was bit by a tick while on a class trip in China—though the judges were less than enthusiastic about their opinion.

Justice Andrew McDonald wrote in a concurring opinion: “Indeed, while the damages award in the present case shocks my conscience, our existing standard does not provide a recognized basis to conclude that the trial court’s conclusion to the contrary was improper.”