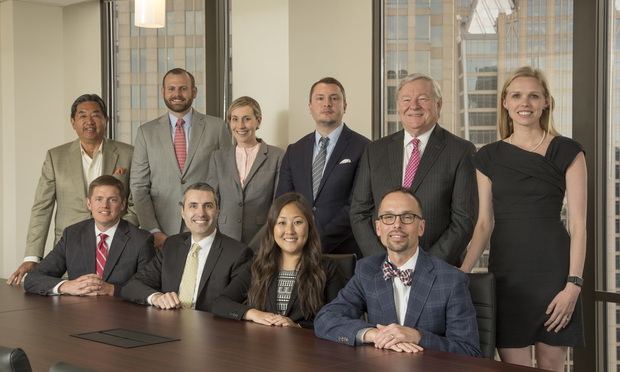 The Charlotte office of fast-growing Holland & Knight has made its third round of hires from the local outpost of Texas-based Winstead.

The group, which includes five partners, two senior counsel, four associates and a contract attorney, has joined the Miami-founded Am Law 100 firm from Winstead, an Am Law Second Hundred firm that Holland & Knight has a history of recruiting from in Charlotte.

Joseph Guay, the New York-based leader of Holland & Knight’s real estate group, said the dozen-lawyer team was encouraged to join the firm by their former peers.

“They have a pretty sophisticated real estate finance practice representing a lot of our key strategic clients, so it was kind of a no brainer for us,” Guay said. “They were looking to move to a bit of a bigger platform. We have 27 offices where we do real estate in the U.S. and provided a good place for them to be and hopefully grow their client relationships.” Lee is ranked by Chambers and Partners as a top real estate finance lawyer in North Carolina for his work in the commercial mortgage-backed securities market (CMBS). He has represented financial institutions based in Charlotte, Los Angeles, Miami, New York and San Francisco.

Guay said the addition of the group’s CMBS practice would be a “strategic fit” for Holland & Knight’s real estate finance practice, which hasn’t traditionally handled a lot of that type of work.

“Holland & Knight has built an impressive team of real estate and finance professionals in almost every major city in the U.S.,” Lee said in a statement. “We imagine that a multitude of opportunities will flow from this extensive network. Likewise, we look forward to providing local Charlotte support for various firm clients.”

For its part, Texas-based Winstead is coming off a relatively strong financial year for an Am Law 200 firm. The 321-lawyer firm saw gross revenue rise 1.5 percent, to nearly $217 million. Revenue per lawyer rose 3.2 percent, to $675,000, while profits per equity partner increased 5.2 percent, to just north of $1.1 million. The firm’s Charlotte office lists 17 lawyers on its website.

So far this year, the nearly 1,200-lawyer firm has been busy adding partners.

“We’re aggressive in the market, and I think our firm has a good story to tell,” Guay said. “Our success has allowed us to go into the market and be attractive to a lot of lateral candidates.”