Construction magnate John Fish has alleged that the firm failed to disclose conflicts in representing three parties with interests in the development, including the fact that a partner had a financial stake in one of the entities.

Am Law 200 firm Goulston & Storrs is facing a $300 million lawsuit based on allegations the firm failed to disclose client conflicts and relevant information to a construction client in Boston, ultimately causing a major real estate development project to flounder. The firm says the claims are without merit.

The complaint, filed Friday by construction magnate John Fish and his company JFF Cecilia in Massachusetts State Court, centers on a billion-dollar, mixed-use high rise project in Boston’s Back Bay neighborhood, referred to in the complaint as the St. Cecilia’s Project. Also involved in that project was Stephen Weiner and his firm, Weiner Ventures, which conceived the project, according to Fish’s complaint. 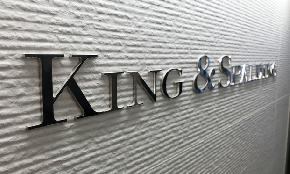 Stephen O'Neal is the 13th lateral partner King & Spalding has added this month, a streak that includes six mass tort litigators from Orrick and a trio of international arbitrators from Kirkland & Ellis.