How the Q2 economic dip may be followed by a structural shift in demand away from traditional firms—and how partners should prepare for it.

Just as with the global financial crisis from a decade ago, the ongoing COVID-19 pandemic will have two effects on law firm demand: a near-in contraction in response to slowed economic activity and a longer-term structural shift away from traditional outside counsel. The former will precipitate a Q1 to Q2 2020 drop in hours of 10 to 15 percent; the latter will delay Big Law regaining its pre-COVID level of demand until 2026; Mid Law may never fully recover. Partners who believe the requisite response to the ongoing recession is simply to ride it out should reevaluate: a new view of what it means to be a partner at an elite firm is required.

Let’s start with a review of what happened to law firm demand at the onset of the global financial crisis. Figure 1 shows quarterly total hours for firms of two different sizes. The data are from Thomson Reuters Peer Monitor. The Big Law numbers are an average of a consistently-defined group of 33 Am Law 100 firms; the Mid Law numbers are for a consistent group of 34 Am Law Second Hundred and mid-sized firms. The level of broad economic activity is indicated by quarterly GDP.

GDP dropped markedly in Q4 of 2008 (following the collapse of Lehman Brothers in September) and continued to contract until mid-2009 with the trough being 4 percent below pre-drop levels. The timing of the near-in drop in Big Law demand mirrored that of GDP but the scale of the drop was 8 percent, twice that of GDP. In contrast, the near-in change in Mid Law demand fluctuated around the drop in GDP, with the scale of the contraction being the same as the 4 percent drop GDP. This difference reflects that the large transactions that make up a greater share of Big Law workflow dry up quickly on a recession’s onset and, contrarily, that practices which grow at a recession’s onset (labor and employment, renegotiation of contracts) comprise a greater share of Mid Law work. The addition of Chicago-based Gregory Brown and Christopher Buch follows another lateral hire Polsinelli made earlier this year in the same practice. 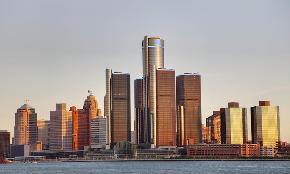 The Detroit-headquartered firm cited the economic slowdown, particularly in the auto industry, behind its personnel cuts.