Inhumane treatment of sick and injured livestock at the nation's slaughterhouses prompted California legislators to pass a criminal law in 2008 requiring that slaughterhouses immediately euthanize such animals. But the law was in jeopardy Wednesday, as the Supreme Court appeared to accept meat industry arguments that federal regulation of slaughterhouses trumps any state effort to dictate how "non-ambulatory," also known as "downer," animals should be handled. 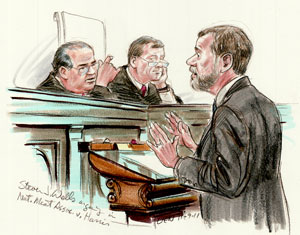 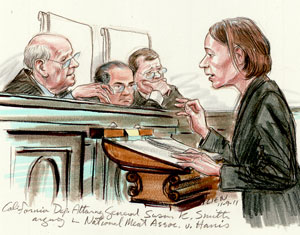 “OUTSIDE THE SCOPE”: Dorsey & Whitney’s Steven Wells Steven Wells (left) and Deputy California Attorney General Susan Smith argue in National Meat Association v. Harris.( Sketches by Art Lien. View Lien’s work at www.courtartist.com .) Inhumane treatment of sick and injured livestock at the nation’s slaughterhouses prompted California legislators to pass a criminal law in 2008 requiring that slaughterhouses immediately euthanize such animals. But the law was in jeopardy Wednesday, as the Supreme Court appeared to accept meat industry arguments that federal regulation of slaughterhouses trumps any state effort to dictate how “non-ambulatory,” also known as “downer,” animals should be handled. The justices heard arguments in National Meat Association v. Harris, the next in a series of federal pre-emption cases the Court has heard in recent years. The outcome of the cases – whether federal or state law should prevail — is often unpredictable, but this one appeared easy to most justices. The Federal Meat Inspection Act explicitly forbids states from enacting laws “in addition to or different from” the federal regulatory regime that covers slaughterhouse operations. Arguing for the National Meat Association, Dorsey & Whitney lawyer Steven Wells told the justices that phrase meant that “Congress has unmistakably ordained that one set of rules govern animal handling and treatment, inspection and determinations of meat quality for sale… And those rules kick in at the slaughterhouse gate.” Though the California law covers all livestock, the case before the Court involved only the treatment of pigs. Under questioning, Wells conceded the possibility that states could take other actions outside the slaughterhouse to prevent inhumane treatment, such as regulating the transport of downer pigs, or even requiring state inspection before they enter federally regulated slaughterhouses. But California’s law invaded the province of federal regulation, he said, in part because the ambulatory condition of the swine often cannot be determined until the animals are inside the slaughterhouse premises. Benjamin Horwich, an assistant to the U.S. solicitor general, argued on the side of the meat industry, telling the Court that states “cannot tell slaughterhouses how they are to deal with an animal that is on their premises.” The justices saved their tough questioning for Deputy California Attorney General Susan Smith, who defended the state statute. Her basic argument was that the state law does not interfere with the federal regulation of slaughterhouses, because it operates “outside the scope” of the federal law, which she said is limited to animals that are processed for human consumption. Acting to combat cruelty to animals, Smith said California was “categorically removing” all downer pigs from even entering the slaughtering process for meat for humans. But justices did not appear to buy her argument. Justice Elena Kagan, for one, said that at least some of the pigs that California would have euthanized would otherwise eventually be slaughtered for human consumption under the federal system, which allows for the processing of some “suspect” meat. “That’s exactly where the California system diverges from the federal system,” and would therefore be expressly pre-empted, she said. Justice Stephen Breyer agreed with Kagan. “The federal law does not require me immediately to go over and euthanize the cow. Your law does require me to go over and immediately euthanize the cow,” Breyer said. “Therefore, your law seems an additional requirement,” in violation of the wording of the federal law. Added Justice Sonia Sotomayor, “I don’t see how you can argue that you aren’t trenching on the scope of the [federal] statute.” But much to the frustration of the justices, Smith stuck to the same “outside the scope” argument, mostly without elaboration, for her entire half hour of argument. Tony Mauro can be contacted at [email protected].