On the streets of Lower Manhattan, the protesters at Occupy Wall Street get an on-the-spot lesson from educator Amy Whitaker about the history of U.S. finance and how the market works.

By Catherine Dunn | October 12, 2011 at 12:00 AM | The original version of this story was published on Corporate Counsel
X

Your article was successfully shared with the contacts you provided.
In the middle of Manhattan’s Zuccotti Park, filled with Occupy Wall Street protesters and sleeping bags and cardboard signs, a chorus of voices announced Tuesday’s 10am speaker, come to teach investment theory and regulations to anyone willing to listen. The occupiers, who are not permitted to use amplified sound, called out each phrase of the announcement, pausing every couple of words so the sound would carry: “Amy Whitaker. . . Teaching Stock. . . Market Basics. . . At Red Structure. . . Now.” Whitaker wound through the encampment to the base of the shallow steps near the corner of Broadway and Cedar Street, in the shadow of the red Joie de Vivre statue. She wore a lanyard from California College of the Arts, where she also teaches, and handed out lecture notes from a manila folder. With a Yale MBA, an MFA in painting, and a book on art, business, and politics to her name, she’s used to teaching this subject to a different kind of crowd. “I love teaching economics to artists,” she said to the small group gathering around her. “They start to come up with solutions that are really, gratifyingly imaginative.” 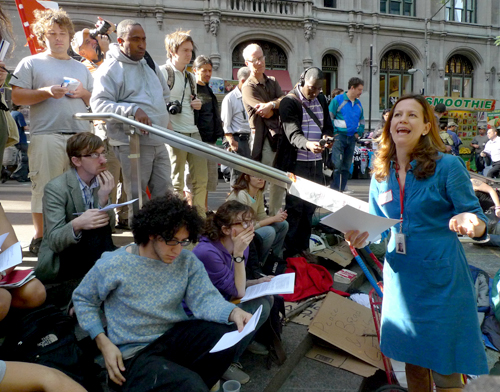 Teach-ins, lectures, and guest appearances have become commonplace at Occupy Wall Street, the growing protest movement that opposes the influence of the nation’s wealthiest one percent over the U.S. financial system and government. As the nearly four-week-old movement spreads to other cities around the country, the base camp in New York’s financial district continues to draw luminaries such as Nobel economics laureate Jospeh Stiglitz, who showed his support with a talk last week. Other lecturers have included economist Jeffrey Sachs, of Columbia University’s Earth Institute, and Naomi Klein, acclaimed author of the anti-corporate treatise No Logo. Whitaker’s lesson plan sought to elucidate the underpinnings of the system at the center of the protests. She’s a self-described populist who believes in the power of general knowledge. And, with a nod to Winston Churchill, she believes that capitalism is the worst economic system—except for all the others. “It’s a huge social problem that more people don’t understand how the market works,” she said in an interview the day before her talk. If the people of Occupy Wall Street knew more, she thought, “it would help them ask questions about the actual design of markets.” So with the din of morning traffic, construction jackhammers, and the occasional siren in the background, Whitaker set to work on the basics—starting on the transition from a barter economy to the beginnings of capitalism, and working her way through the stock market crash of 1929 and the dawn of government regulations that followed amidst the Great Depression. The 30-minute lecture touched on the Securities Acts of 1933 and 1934, and the Banking Act of 1933—more commonly known as the Glass-Steagall Act—which separated commercial and investment banking practices and was repealed in 1999. Near the end of the lesson, Whitaker paused before allowing time for questions, and caught the eye of a man with graying hair, wearing the blue-jacketed uniform of a trader on the New York Stock Exchange. He smiled and nodded at her, before ambling off toward the food carts that line the park’s southern edge. “If you see that guy,” Whitaker said to the audience, explaining what his uniform signified, “I would ask him what he does.” After the talk, a woman sitting nearby gave her take. Joanna Hecker is a graduate student pursuing a PhD in history who saw her parents lose most of their retirement savings in the financial crisis. “I’m terrified about my own financial future,” she says, “and that strikes me as inherently unfair and inherently wrong.” At the same time, she says, “I don’t have the slightest understanding of modern finance capitalism.” She thought Whitaker’s take was balanced, if more centrist then her own left-leaning views. “People who are here listening and speaking come from across the political spectrum,” she said. “It’s incorrect to suggest that this is a crazy, raging hippie movement.” Hecker was among the 700 protesters arrested on the Brooklyn Bridge on October 1 and shared a jail cell with five other women—all teachers—from Occupy Wall Street. 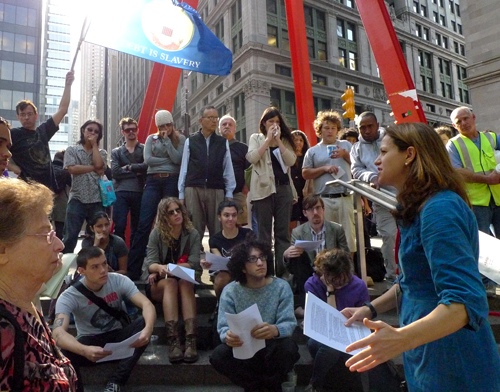 “It felt so apparent that that was something we needed in this space,” said an OWS protestor named Jesse, who declined to give his last name, of Whitaker’s talk. “I’m excited for more words to be part of our discourse than transparency, solidarity, consensus, and consent,” the terms that make up the main OWS chants. For Alexis Goldstein, a computer programmer who once worked for Morgan Stanley, Merrill Lynch, and Deutsche Bank, stopping by Zuccotti Park has been refreshing. She listend to Whitaker’s presentation and will give her own teach-in about the history of Glass-Steagall on Monday. She believes the financial system is “complex by design” and that “trying to explain it to someone with no economic background is very hard.” At the same time, Occupy Wall Street strikes her as a sign that what went wrong with that system in 2008 still resonates: “This is a very strong signal that the public has not forgotten.” Photos by Maggie Soladay.