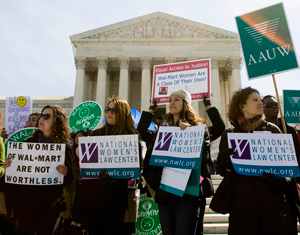 The massive gender discrimination class action against retail giant Wal-Mart ran into strong resistance at the Supreme Court on Tuesday, after surviving lower court challenges ever since it was launched 10 years ago. 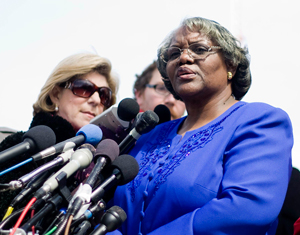 DUKING IT OUT: Women’s groups and union activists protested outside the U.S. Supreme Court on Tuesday as the high court heard arguments in the Wal-Mart class action case. Betty Dukes, a Wal-Mart employee and lead plaintiff in Wal-Mart v. Dukes, spoke with reporters outside the Court.

The massive gender discrimination class action against retail giant Wal-Mart ran into strong resistance at the Supreme Court on Tuesday, after surviving lower court challenges ever since it was launched 10 years ago.

“It’s not clear to me: what is the unlawful policy that Wal-Mart has adopted?” said Justice Anthony Kennedy, who as usual is the likely swing vote in the closely watched business case Wal-Mart v. Dukes. The outcome of the dispute, involving as many as three million female current and former workers, could either cost Wal-Mart billions in back pay or limit the use of class actions as a civil rights remedy.

Picking up on an argument made by Wal-Mart, Kennedy told the lawyer for the plaintiffs that his argument “faces in two directions.” Plaintiffs claim the gender discrimination at Wal-Mart resulted from excess discretion given to local store managers on the one hand, and a companywide “corporate culture” that led to biased decisions on the other hand.

“I’m getting whipsawed here,” said Justice Antonin Scalia, following up on Kennedy’s concern. “Which is it?”

Joseph Sellers, the plaintiffs’ lawyer, said that while managers are given “broad discretion,” they “do not make these decisions in a vacuum.” The justices did not seem satisfied with his answer, and Sellers told the justices the concern they were raising would be resolved at the trial, “not at this stage.”

At another point Chief Justice John Roberts Jr. suggested that even if a significant number of cases of gender bias in pay and promotion are reported at Wal-Mart stores, it could be the result of a “few bad apples” being magnified by the size of the chain – more than 3,400 stores when the class action was first filed in 2001. Roberts also said Wal-Mart’s pay disparity for women was “less than the national average,” but Sellers responded that national statistics do not reduce the chain’s “obligation under Title VII.”

As those comments suggest, several justices seemed eager to debate the merits of the discrimination case, even though the issue before the Court is a threshold one: whether women employees at Wal-Mart had enough in common to certify a class under federal rules of civil procedure governing class actions, and whether such a class could, if successful, win back-pay damages or merely an injunction against future discrimination.

Both the U.S. District Court for the Northern District of California and a divided U.S. Court of Appeals for the 9th Circuit certified the class. The plaintiffs’ lawyer Sellers, along with Justices Ruth Bader Ginsburg, Elena Kagan and Sonia Sotomayor, tried to steer the argument back to the certification issue. They had limited success.

Outside the Court, a group of noisy demonstrators protested against Wal-Mart, while inside the courtroom was packed with spectators, including named plaintiff Betty Dukes and Christine Kwapnoski, who still work at Wal-Mart.

Also sitting in the public section of the audience was Eugene Scalia, a partner at Gibson, Dunn & Crutcher and son of Justice Antonin Scalia. A group of Wal-Mart critics urged the justice to recuse because a Gibson Dunn partner of his son’s, Theodore Boutrous Jr. is arguing for Wal-Mart, and Eugene Scalia has represented Wal-Mart in the past. A story about Scalia’s Gibson Dunn connections appears here.

It was Boutrous’s first argument before the Court, though he is a veteran of complex corporate defense work. The plaintiffs’ lawyer was Sellers, name partner at Cohen Milstein Sellers & Toll in D.C. and a longtime civil rights litigator who has argued at the high court once before. (Interviews with Sellers and Boutrous appear here and here.)

Boutrous planted the seed for the justices’ doubts about the plaintiffs’ argument in his own presentation, asserting that it was an “incoherent theory” to argue that Wal-Mart hiring decisions are both decentralized at the store level and centralized by corporate policy. Kagan suggested in response that “excessive subjectivity” could in itself be a companywide policy.

Instead of making broad statements about the potential harm to Wal-Mart if the class action is upheld, Boutrous stuck to the details of class action requirements. He attacked the statistical and sociological evidence the plaintiffs presented to win creation of the class as insufficient to meet the requirements of commonality. And he defended the company as one with a clear policy and track record favoring the hiring of women.

Sellers also dwelled on the class details, but when asked about the merits, he did not shy away. He talked about evidence that at the Sam Walton Institute, managers were presented with the statement that women are underrepresented in management because “men seeking advancement are more aggressive.” Said Sellers, “That’s a typical, stereotypical statement provided to every person goint through the management training program.”

In addition, Sellers cited testimony from a Wal-Mart vice president that the policy against discrimination against women was “lip service” – a claim that Scalia asked Boutrous about during his rebuttal. “I’m glad you asked about that, Justice Scalia,” said Boutrous. The company official said the policy would have been lip service if it had not been tied to compensation, Boutrous said.

In upholding the class certification, an en banc panel of the 9th Circuit last year accepted the anecdotal evidence of bias against women presented by the plaintiffs, as well as social science testimony asserting that Wal-Mart’s culture created “a conduit for gender bias” throughout its stores.

Judge Michael Hawkins, writing for the 6-5 majority, agreed with the district court that “It would be better to handle some parts of this case as a class action instead of clogging the federal courts with innumerable individual suits litigating the same issues repeatedly.” In dissent, Judge Sandra Ikuta said the class was too large and unwieldy. “On its face, a class action of this sort makes no sense.” In another dissent, Judge Alex Kozinski said that with a “kaleidoscope” of supervisors and different work settings, the women in the proposed class “have little in common but their sex and this lawsuit.”

The 9th Circuit also found that the class could seek back pay for class members even though Rule 23(b)(2) of the Federal Rules of Civil Procedure authorizes injunctive and declaratory relief. Classes certified under that rule are mandatory, without opt-out provisions for class members. This issue did not occupy much time at the argument.

One issue that was prominent in the briefing before the case was argued did not come up at all during argument. Amicus curiae briefs for Wal-Mart asserted that large class actions force companies into “blackmail settlements.” Roy Englert Jr. of Robbins, Russell, Englert, Orseck, Untereiner & Sauber, in a brief for Intel Corp., said, “Class certification can transform an ordinary lawsuit into ‘bet-the-company’ litigation … But companies can seldom afford to make such wagers — no matter how small the odds are of an adverse judgment — so class certification almost always coerces an immediate settlement.”

In a brief on behalf of a group of economics and law professors, Robert Libman of Miner, Barnhill & Galland responded, “The myth of ‘blackmail settlements’ has led to unsubstantiated claims that, as class numerosity and the size of potential judgment awards increase, so, too, does the likelihood that class action plaintiffs are merely taking advantage of risk-averse defendant corporations.”

Tony Mauro can be contacted at [email protected].