With Two More Albright Transfers, More Tech Companies Are Getting Their Tickets Punched Out of Waco.

The Federal Circuit issued two more mandamus orders Wednesday directing U.S. District Judge Alan Albright to transfer cases out of his court. That appellate court's orders are starting to take a bite out of the nation's busiest patent docket.

The trickle of Federal Circuit orders directing U.S. District Judge Alan Albright to transfer patent infringement cases out of his Waco courtroom is turning into a steady stream. 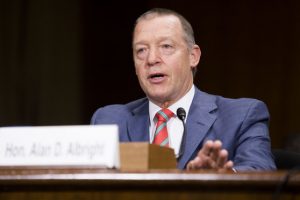 The U.S. Court of Appeals for the Federal Circuit issued two more mandamus decisions on Wednesday, bringing the number to seven over the last two months. (That doesn’t include an eighth in which the appellate court denied the writ but said it was confident Albright would “expeditiously reconsider,” an order some lawyers dubbed mandamus lite.)