Prior suits over priest sexual abuse typically target local dioceses, some of which have declared bankruptcy under the weight of litigation. This week's suit, filed by St. Paul, Minnesota, sex abuse lawyer Jeffrey Anderson, explores uncharted waters with its attempt to recover from the Vatican.

Litigation over priest sexual abuse has gone in a new direction as the Vatican is named as a defendant in litigation over allegations of abuse by defrocked Cardinal Theodore McCarrick.

The Holy See repeatedly promoted McCarrick to bishop, archbishop and cardinal even as it was aware of his history of sexual misconduct, according to a suit filed Tuesday in federal court in Newark by four men who claim they were abused by him. The suit stems from a report issued by the Vatican on Nov. 10, which found that a succession of church officials looked the other way when confronted with reports of sexual misconduct by McCarrick. 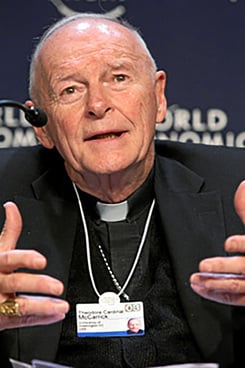