Allen & Overy has called for partners to contribute capital as it becomes the latest firm to take measures to protect itself financially in light of the disruption caused by the coronavirus pandemic.

The Magic Circle firm is holding a cash call and is gradually reducing its partner profit distributions, it confirmed on Tuesday. It has also frozen its associate and support staff pay, meaning it will not undertake annual salary reviews due to take place in the first quarter of the forthcoming financial year.

The firm, which has no debt, has also deferred certain recruitment and cancelled several events, a spokesperson said in a statement.

“The COVID-19 global crisis is an unprecedented situation for us and our clients,” Allen & Overy said in the statement. “The firm is in a very strong financial position but given the unknown nature of the evolving challenges, and their long term impact on our markets, it is sensible to introduce some prudent management measures as part of our ongoing scenario planning.

“A&O retains good diversification across practices and one of the broadest international offerings among the global elite firms, so we are confident in our resilience if economic conditions worsen.”

Various firms are taking action to ensure they remain financially secure. Reed Smith is reducing partner distributions while Linklaters, Pinsent Masons and Fieldfisher are all considering a reduction or a delay to the distribution of profits to partners.

The impact of the crisis on bonuses and redundancies are high on lawyers’ agendas, according to research undertaken by Law.com International’s U.K. arm Legal Week in March.

Several U.K. listed firms have taken measures to hedge themselves against the financial impact of the crisis.

The Ince Group cancelled an interim dividend that was due to shareholders by April 16, 2020. It has also decided to delay the announcement of its full year results from March 31 to ‘early July.’ according to a statement on the London Stock Exchange.

Meanwhile, Knights will reduce its board member salaries by 30%, and slash the salaries of “all staff whose salaries are £30,000 or more” by 10%, from April 1, it announced earlier in March.

Simon Lock contributed to this report. 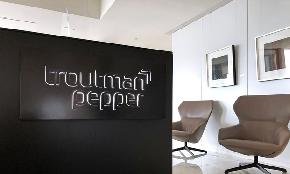 The pandemic-induced shutdown has been the greatest immediate challenge for the Troutman Pepper merger, said the firm's vice chair, Thomas Gallagher.