Impeachment, Lawyers and the Views from the War Rooms

Attorneys who worked on proceedings of the past share how they navigated an arena with little guiding precedent.

When David Dorsen joined the Senate select committee on Watergate in 1973, it was less than a month before the panel’s historic hearings began airing on national television. 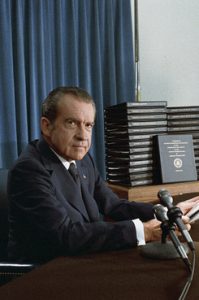 President Richard Nixon with his edited transcripts of the White House Tapes subpoenaed by the Special Prosecutor, during his speech to the nation on Watergate, on April 29, 1974.

For lawyers like Dorsen, who stayed largely behind the scenes during the Senate probe, there was pressure not to just keep up with the pace of the investigation, but to make sure the right questions were asked of the right witnesses. The stakes were high as the staff looked into a matter as significant as potential wrongdoing by President Richard Nixon.