Leonard Klingbaum, who was the chair of Willkie's finance group, and his mentee, Andrea Hwang, have joined Ropes & Gray as partners in New York. Klingbaum said his biggest corporate clients "appreciate the move to Ropes."

Two finance partners at Willkie Farr & Gallagher, including the former chair of the practice, have joined Ropes & Gray’s finance team as partners in New York.

Andrea Hwang, who made partner at Willkie this year, and Leonard Klingbaum, Hwang’s mentor who was chair of Willkie’s finance group until he left the firm, started at Ropes on Oct. 4, two days after they gave notice at Willkie that they were leaving. Ropes’ talented lawyers and impressive client base in deal work attracted them to the Boston-based firm, they said in an interview. 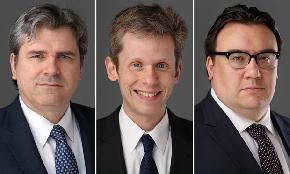 John Ertman, Caleb Dulis and Julian Helisek have quietly launched a firm representing both plaintiffs and defendants in the investment management field.