A new study by the Law Society details "significant negative effects" of a no-deal Brexit scenario.

The U.K. legal sector could suffer a £3 billion ($3.87 billion) revenue hit and lose 12,000 jobs by 2025 in the event of a “no-deal” Brexit, according to a new study released by the Law Society, an independent professional association that represents and governs solicitors in England and Wales.

The study warns against the potentially “significant negative effects” on the legal sector of a hard Brexit, an outcome which is expected to hit revenue growth and economic performance across all sectors, resulting in reduced demand for legal services and a decrease in employment in the legal sector.

In its analysis of both “soft” and “hard” Brexit outcomes, the Law Society anticipates a loss of nearly $3.9 billion in revenue to the legal sector by 2025 in the event of a no-deal. The study suggested that if in such a situation the U.K. were to fall back on World Trade Organization (WTO) rules, growth in the sector could drop to as low as 1.1 percent per year—or £30.86 billion ($39.84 billion) revenue by 2025—as opposed to steady growth of 2.1 percent in a “soft” Brexit scenario—or £33.83 billion ($43.67 billion) turnover. 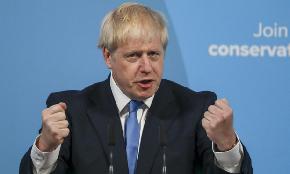