How can law firms change their governance or financial structure to incentivize more long-term thinking? A popular fast-casual restaurant chain could provide an important example.

In today’s Law Firm Disrupted, we look at how today’s law firm equity structure incentivizes short-term thinking. And what law firms could learn from Chipotle about changing their ways. I’m Roy Strom, the author of this weekly briefing on the business of law firms. Do me a favor and send me an email about why you read this column: [email protected]. Full disclosure: It will help me craft better columns, and it may also be used anonymously (or attributed, if you wish!) in an advertisement for this briefing. 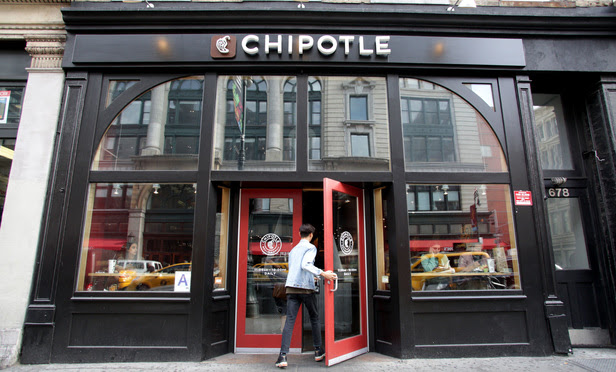 How can law firms change their governance or financial structure to incentivize more long-term thinking?That was the question we discussed before the July 4th holiday. Before we directly answer that question (don’t worry, we will!), it’s worth taking a more structural look at law firms to understand why that question is even worth asking. Or why law firms are, as Yale Law School professor John Morley put it in a conversation this week, “pathologically present-focused.”Morley is working on a book about worker ownership at law firms and other professional service shops and “the opportunities and pathologies it creates.” That will be a sort of follow-up to his 2015 paper, one worth reading, titled “ Why Law Firms Collapse .”Morley said much of a law firm’s present-tense thinking is a direct result of their unique worker ownership structure. The unique aspect is the way in which law firm equity is priced and traded. Which is to say, it isn’t.A retiring partner can’t sell the shares he or she has acquired over the course of their career. And, excepting lockstep firms, law firm “shares” are hard to put a “price” on. Whatever equity a partner has is often “priced” by a managing partner or a committee that evaluates a partner’s contributions (or likeability) over some duration.The rights that come along with law firm equity are, in some cases, as little as two-fold: First, you get a vote on some decisions (use it wisely). Second, a managing partner (or committee!) gets to decide your yearly income. Which is not really all that different than when you didn’t have that “equity.” At some level, the biggest difference between an equity partner and a nonequity partner is not about how you’re paid (some decision by someone somewhere), but about how you might stop being paid: You’re usually entitled to a vote before you’re asked to leave.The extinguishing nature of law firm equity creates problems of generational transfer—a disinterest in long-term thinking—that Morley says is equivalent to a town whose residents vote for immediate benefits at the expense of the townspeople 20 years down the line. For instance, like how my lovely city Chicago sold its future parking meter revenue in a deal where investors are set to recoup their money by 2021 . At that point, they will have 62 more years to collect parking fees that maybe someday will be paid by my 2-year-old niece.“It’s no coincidence that law firms and other professional services firms are the only large businesses still existing in America that have unfunded pension plans,” Morley said. “And they have them for the same reason as towns and cities, which is they have a problem with generational transfer.”A relatively recent generational transfer that law firms could maybe learn from took place at Chipotle Mexican Grill Inc., the popular quick-service restaurant chain.The now-ubiquitous burrito joint had been on a mad growth tear under the leadership of its founder, Steve Ells. And he was paid like crazy. Between 2011 and 2014, Ells earned more than $145 million in stock awards. They gave the man a lot of equity.At a law firm, what could you do if the founder and managing partner of an outfit growing like gangbusters wanted a bunch of money? Leave? Have their name taken off the wall?At Chipotle, investors got angry. Here’s a New York Times story about it.Part of the reason they were mad was that Chipotle paid Ells a lot like how law firms pay their partners: Based on short-term results.Rather than more typical stock options that Ells would have to wait years to cash in, he got most of those stock awards through something called “stock appreciation rights.” That meant something like this: If the stock went up, he got more. Between 2011 and 2014, Ells got 600,000 shares and cashed in 548,000, according to the Times. It was like the corporate equivalent of a law firm’s pay-as-you-go compensation structure.Columbia University professor Robert Jackson Jr. described Chipotle’s compensation structure as “an outdated, antiquated structure. It’s not a common or preferred corporate governance practice.” He wasn’t alone.The CtW Investment Group led a charge to vote against Chipotle’s executive compensation package. “It’s a reckless pay structure that does nothing to appropriately incentivize management to create long-term value,” Michael Pryce-Jones of CtW was quoted as telling the Times.At Chipotle’s annual shareholder meeting in 2014, 75 percent of investors voted against the company’s executive compensation plan. Which typically doesn’t happen. That was the highest percentage of “no” votes on a compensation plan among the 3,000 largest U.S. companies that year, the Times reported .Ells was ousted as CEO in November. Chipotle brought in the former CEO of Taco Bell , and the company’s shares are up quite a bit lately. On the way out, Ells was given a grant of 175,000 shares. He has to wait until January 2021 to cash them in. Maybe Chipotle learned its lesson. Perhaps Ells got one more crazy payday (at current prices, those shares are worth about $8 million).At this point, I would like to point out to Chipotle and its fans (myself among them) that it is pure coincidence that a company with a few tainted food problems is being used as an example of a “pathologically” present-focused compensation structure.Anyway, Yale’s Morley thinks investor ownership of law firms would do a great deal to relieve those firms from their present-tense structures, which he said is a consequence of their current ownership apparatus. Of course, that would also require some rules being changed here.“I think investor ownership is possible. I think the law ought to be amended to permit it ,” Morley said. “Whether or not it is good or bad, who can really say?”He added: “Personally, I think that’s the wave of the future. I think it will be good for the world. And it will be good for lawyers in some ways and bad for lawyers in other ways.”