A merger of Dallas-based Winstead and Atlanta's Troutman Sanders would create a firm with close to 1,000 lawyers and gross revenue of about $725 million.

Dallas-based Winstead and Atlanta-based Troutman Sanders are discussing a possible merger, according to two former lawyers at Winstead and another lawyer with knowledge of the talks.

Neither firm would confirm that merger negotiations are taking place but two former Winstead lawyers and another lawyer with knowledge of the discussions verified the story, which was first reported on Tuesday by The Texas Lawbook.

David Dawson, chief executive officer and chairman of Winstead, said the firm does not comment on discussions with individual lawyers, groups of lawyers or other firms. He said Winstead is approached regularly by “a variety of firms, large and small, domestic, international, and we from time-to-time have reached out on our own” to explore opportunities. In response, Mexican jurists took to Twitter to defend the right of all to legal representation. 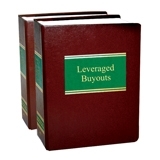 This comprehensive guide explains each variety of leveraged transaction in detail its rationale, the advantages and drawbacks of the available financing and tax struct...