Former Bingham partner Michael DiSanto claims that Cotchett and former partner Philip Gregory mishandled an arbitration where he was seeking millions of dollars in unpaid guaranteed compensation from the firm. He lost counterclaims forcing him to hand over stock units from his prior employer to Bingham.

A former Bingham McCutchen partner has slapped his former lawyers at Cotchett, Pitre & McCarthy with a multimillion-dollar professional negligence lawsuit, claiming they mishandled an arbitration where he was seeking millions in unpaid compensation guarantees from his old law firm.

In a complaint filed in San Francisco Superior Court on May 24, lawyers for former Bingham partner Michael DiSanto claims he had a written agreement with the firm that guaranteed him $2.5 million in annual compensation from when he joined in March 2013 through 2015, and at least $1.5 million in 2016, including salary and bonus. 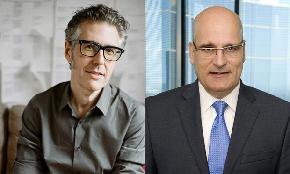 This Litigating Life: Knobbe Martens' Re Muses on Life in a Hyper-Achieving Family on Public Radio

Knobbe Martens partner Joseph Re recently put his skills to use to organize auction for his parents' estate and talked about the experience on public radio's "This American Life".