The deputy attorney general's planned remarks to a compliance audience in Washington did not reference Trump's demand for an investigation of the FBI. “We stress the need to act ethically and to do justice. We expect our prosecutors, our law enforcement agents and other personnel to be thinking about their ethical obligations with every decision that we make,” Rosenstein said at the event, hosted by Compliance Week.

Deputy Attorney General Rod Rosenstein on Monday highlighted the U.S. Department of Justice’s efforts to instill a sense of ethical responsibility within its ranks, a day after President Donald Trump demanded an investigation into whether the department or the FBI “infiltrated or surveilled” his campaign for political purposes.

Trump’s demand, made in a Sunday tweet, struck some legal observers as going beyond his regular approach of impugning the department’s integrity and crossing into the more questionable territory of ordering up an investigation. The department responded by asking its internal watchdog, the Office of Inspector General, to expand an ongoing inquiry into the surveillance of a former Trump campaign official. Rosenstein said Sunday: “If anyone did infiltrate or surveil participants in a presidential campaign for inappropriate purposes, we need to know about it and take appropriate action.” The former attorney general is on the legal team representing the corporation against a discrimination lawsuit from Black former franchise owners. 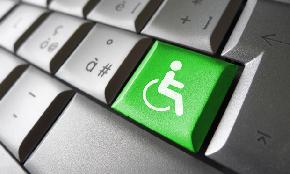 Disability Access Lawsuits Are Rising. How Do You Mitigate Risk?

Website accessibility lawsuit filings are at an all-time high and, according to the projections, expected to keep climbing.