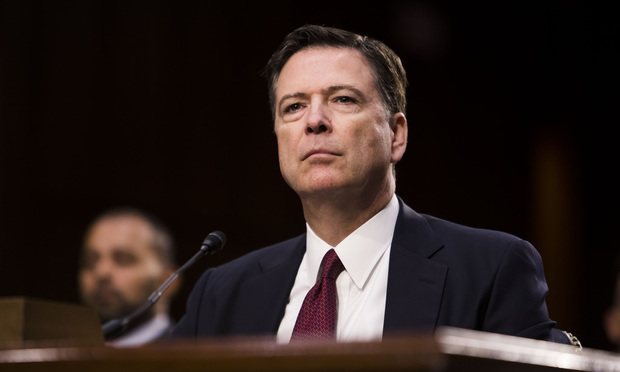 A pair who became best buddies at the U.S. attorney's office in Manhattan have officially reunited as a lawyer-client combo.

Skadden, Arps, Slate, Meagher & Flom partner Patrick Fitzgerald has been representing one of his best friends, James Comey, since he was ousted as FBI director last year by President Donald Trump, according to news reports.

The representation, first reported by Talking Points Memo, pairs Fitzgerald with a client whom he described as “one of my best friends” in an interview with The American Lawyer published just six days before Comey’s firing. Since that time, Fitzgerald has declined to comment about Comey’s time in the political spotlight. He did not immediately return a request for comment for this story.

The Chicago Sun-Times reported Tuesday that at an event publicizing his new book, “A Higher Loyalty,” whose sales figures are already dwarfing previous political tell-alls, Comey confirmed Fitzgerald has been part of a three-lawyer team advising him since his firing on May 9, 2017.

It is a high-powered legal team. As noted a decade ago by The American Lawyer, Fitzgerald and Comey became close during their time in the U.S. Attorney’s Office for the Southern District of New York, which Comey went on to lead at the same time Fitzgerald was serving as the top U.S. attorney for the Northern District of Illinois.

Comey is also being represented by Dechert partner David Kelley, who once served as deputy U.S. attorney under Comey. Daniel Richman, a professor at Columbia Law School and another veteran of the powerful federal prosecutor’s office in Manhattan, is the third member of the team. Richman himself has grabbed headlines during Comey’s political travails after the ex-FBI director asked him to leak to the press memos he had written about his interactions with Trump. Those memos were released last week. 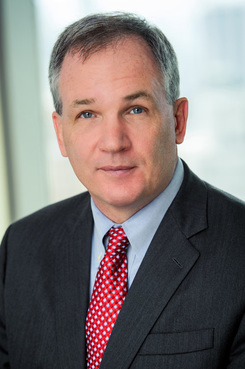 For his part, Fitzgerald has recently been involved with a national political storyline: Trump’s pardon of I. Lewis “Scooter” Libby, a former chief of staff to Vice President Dick Cheney. (The District of Columbia Bar reinstated Libby’s law license in 2016.)

Fitzgerald was tapped by Comey, then serving as deputy attorney general, to serve as a special prosecutor for a probe into whether Libby lied to the FBI about a leak that outed the name of covert former CIA agent Valerie Plame. Libby was later found guilty on four felony counts of making false statements to the FBI.

Trump granted Libby a full pardon earlier this month. In a rare statement, Fitzgerald said the pardon didn’t change the facts of the case.

“While the president has the constitutional power to pardon, the decision to do so in this case purports to be premised on the notion that Libby was an innocent man convicted on the basis of inaccurate testimony caused by the prosecution,” Fitzgerald said in a public statement. “That is false.”

In another development related to Skadden and the investigation being led by special counsel Robert Mueller III, of counsel Gregory Craig has left his role in Skadden’s litigation group in Washington, D.C., as the high-powered firm’s links to Ukraine’s former government continue to potentially be of interest to Mueller and his team.