Charles Rettig of California's Hochman Salkin, the Trump administration's nominee for IRS commissioner, reported $1.13M in law firm salary. Rettig's financial disclosure, and a filing from Michael Desmond, the California solo up for IRS chief counsel, reveal a glimpse at their legal services in the tax arena.

The Beverly Hills, California, tax lawyer nominated by the Trump administration to lead the Internal Revenue Service reported earning $1.13 million in salary and disclosed providing legal services to a host of business professionals and celebrity estates, according to a financial disclosure released Monday. 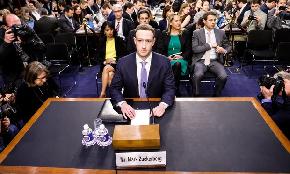 As he testifies before nearly half the U.S. Senate, Facebook CEO Mark Zuckerberg has his company’s in-house legal and lobbying teams at his back.