The gold medalist figure skater is taking a break from her studies at the University of Pennsylvania Law School to attend the Olympics this week as a member of the U.S. Presidential Delegation.

Hughes, who took gold during the 2002 winter games in Salt Lake City, is currently a third-year student at the elite Philadelphia law school and was a summer associate at Proskauer Rose last year. She’s taking a break from the classroom this week to attend the Pyeongchang games as a member of the U.S. Presidential Delegation. That delegation, led by Vice President Mike Pence, includes two generals and the chairman of the House Foreign Affairs Committee. Hughes is the only athlete among the seven-member delegation, which is tasked with attending the opening ceremonies, meeting U.S. athletes and cheering them on at various events.

“Triple axel from @mirai_nagasu!!!” she tweeted, noting the first time a female U.S. skater landed the tricky jump at the Olympics.

Hughes also caught the U.S. women’s hockey team securing a win against Finland on Sunday. Attempts to reach her Monday were unsuccessful. 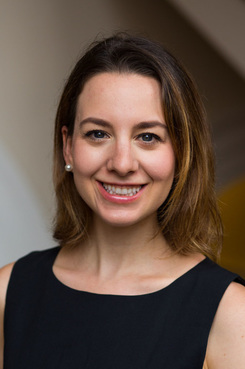 She was the underdog to skating powerhouse Michelle Kwan in 2002, having placed third at that year’s U.S. championships to make the Olympic team. The then-16-year-old upset Kwan to take the gold in Salt Lake City, however. (Kwan went on to the obtain a master’s degree in law and diplomacy from Tufts University.)

Hughes graduated from Yale University in 2009 with a degree in American studies and enrolled at Penn Law in 2015. Since 2014 she has served as a board member of the Women’s Sports Foundation, an organization founded by tennis legend Billie Jean King that promotes women’s leadership by giving girls access to sports.

It turns out that King was an early supporter of Hughes’ law school ambitions, according to a 2015 article the figure skater wrote.

“We went to a hockey game at Madison Square Garden recently, and I told her that I was applying to law school to be more effective in the work we were doing together through the Women’s Sports Foundation, an organization she founded,” Hughes wrote. “In true Billie Jean fashion, she didn’t just approve of the idea of becoming a law student, she celebrated it as if it was the best idea she’d heard all year.”

Hughes managed to keep a low profile on campus, for a short time.

“After a while, word started getting around, but it wasn’t a big deal because it was a small class and we all knew each other,” she told The Associated Press in 2015. “I wanted to make friends with people first.”

Hughes appears to be taking full advantage of the law school experience. She has served as a senior editor of the school’s Journal of Business Law, according to her LinkedIn profile, worked in its expungement clinic, and has been a board member of the Penn Law Women’s Association and the Penn Law Entertainment and Sports Law Society. She even donated a signed copy of the 2002 Time magazine with her on the cover for the school’s Equal Justice Foundation auction. (Listed value: priceless.)

The Long Island native interned for U.S. District Judge Lewis Kaplan of the Southern District of New York the summer after her first year. She spent last summer clerking at Proskauer Rose.

“Sarah is a spirited and engaged member of the Penn Law community,” said Dimitri Islam, Penn Law’s associate director for student development. “We are proud of Sarah’s accomplishments and hope she has a memorable experience at the Winter Olympics.”


Duane Morris LLP seeks a mid-level associate to join its Los Angeles office. The ideal candidate will have 3-5 years of experience in genera...