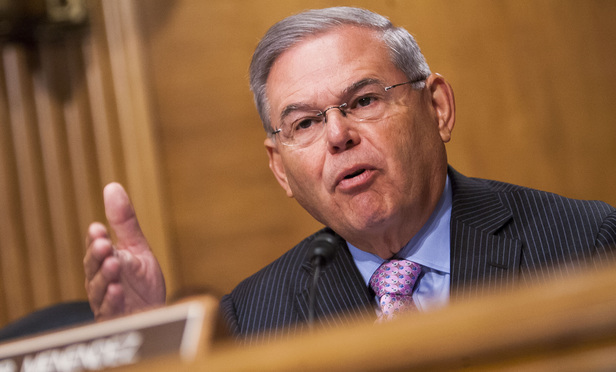 As Menendez Trial Starts, What Has Been Keeping Prosecutors and Defense Lawyers Up at Night?

After working while under a criminal indictment for 28 months, U.S. Sen. Robert Menendez is about to get a chance to prove his innocence. The 63-year-old…

After working while under a criminal indictment for 28 months, U.S. Sen. Robert Menendez is about to get a chance to prove his innocence. The 63-year-old senator’s career and future are on the line when he and Florida ophthalmologist Salomon Melgen go on trial Wednesday in U.S. District Court in Newark.

The April 2015 indictment charges that Menendez received a series of gifts from Melgen—travel on private jets, luxury resort vacations, campaign contributions—and repaid the favors by intervening in regulatory matters involving the doctor. The case will provide a look at the new landscape for federal corruption law in light of the U.S. Supreme Court’s June 2016 ruling vacating the corruption conviction of former Virginia Gov. Bob McDonnell.

Federal prosecutors also have a lot riding on the case in light of recent rulings reversing corruption convictions against McDonnell and former New York Assembly Speaker Sheldon Silver. As the trial of Menendez and Melgen proceeds, here are three questions that are likely weighing on the minds of lawyers in the case.

Will the government’s case be undone by the “McDonnell” ruling?

McDonnell’s conviction was overturned by the Supreme Court on a finding that favors he provided to a benefactor did not rise to the level of official acts. The court ruled that “setting up a meeting, calling another public official, or hosting an event does not, standing alone, qualify as an ‘official act.’” In the McDonnell case, the governor arranged meetings with other state officials where the donor could discuss his fledgling business, and hosted events for the business at the governor’s mansion.