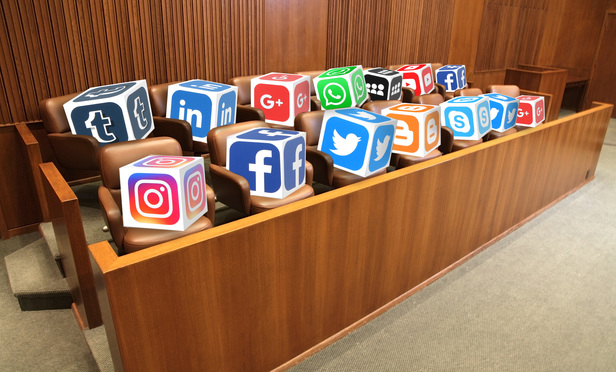 Social media is now a fixture in our lives. But court rules around researching jurors online still vary from state to state and judge to judge.

Any good trial lawyer these days is keenly aware that jurors are revealing valuable tidbits about their lives, their interests, and social and political leanings on such services as Facebook and Twitter. But while social media profiles can present a trove of data points for jury selection—one that legal tech companies are eager to mine—researching jurors online while keeping on the right side of the judge and local ethics rules is hardly a straightforward exercise.

“It’s really an issue that I see developments on a weekly basis,” said John Browning, a trial attorney at Passman Jones in Dallas and author of “Legal Ethics and Social Media: A Practitioner’s Handbook,” set to be published next month. At the end of the day, Browning said, most opinions out there would steer attorneys toward doing more research about their panel over less. Even so, there are nuances depending on what state you’re in, and who the judge is.

Here’s an overview of how the landscape is shaping up in some key jurisdictions.

U.S. District Judge Rodney Gilstrap of the Eastern District of Texas, known as being the busiest patent judge in the country, in January became the first in his district to adopt a standing order that expressly allows researching of juror social media. But he set down some limits. Like the American Bar Association’s opinion from 2014, Gilstrap prohibits attorneys from contacting jurors via social media. His order is arguably broader, though, in that it extends that prohibition to “parties, and their respective employees and agents, including jury consultants.”

But otherwise, Gilstrap said in an interview, the field is open. While he stressed the importance of balancing attorneys’ right to know against juror privacy interests, Gilstrap said he had no qualms about attorneys using social media research to tailor their arguments or make references that would resonate with individual jurors. “Oral advocacy to persuade ordinary citizens is sort of the name of the game,” he said. Gilstrap said researching social media hasn’t been an issue in any of the cases he’s presided over, but he wanted to lay down some ground rules before it did.

Elsewhere in Texas, there’s less clarity. “I think I can count on one hand the number of jury selections I’ve attended where the judge discussed the practice of attorneys ‘Googling’ jurors in front of the venire,” said Kacy Miller, president of CourtroomLogic Consulting in Dallas. But she recommends a conservative approach. . To make sure jurors don’t learn that they’re being researched, her team uses anonymous profiles on LinkedIn and avoids conducting any searches from a law firm’s network, so that a tech-savvy juror wouldn’t be able to trace back an IP address if their personal website was crawled.

If you happen to find yourself in front of Judge Meenu Sasser, a state circuit court judge in West Palm Beach, be advised: she expects that you will be researching jurors’ social media both before and during the case. “It’s an unspoken expectation,” she said in an interview. Sasser said finding out more about jurors online is part of a lawyer’s “duty of competence,” and that clients might be rightfully miffed if their attorneys aren’t doing that kind of investigation.

During trial, Sasser also expects lawyers will help in making sure that jurors aren’t posting confidential information about the trial or revealing anything that would result in a mistrial. (Sasser said she lets jurors know in advance when they sit in her courtroom that their public profiles will likely be browsed.)

Other judges in Florida have taken a similar view. As Browning noted in a recent article, Pinellas Circuit Judge Anthony Randolino suggested in a 2014 ruling that attorneys should be required to research jurors online before trial and bring forth any pertinent information—like a disqualifying bias—as soon as possible. Otherwise, lawyers could wait and seek a do-over when they don’t like the result.

In what has become a famous example of the opposite end of the spectrum, U.S. District Judge William Alsup last year pressed lawyers in a massive copyright case between Oracle Corp. and Google Inc. to forgo online juror research. Though he initially threatened to ban internet searches on jurors altogether, Alsup ultimately said he would allow them provided the tech giants told jurors they were being researched. Both sides opted not to do that.

Alsup’s order reads like a manifesto for juror privacy rights. “Trial judges have such respect for juries—reverential respect would not be too strong to say—that it must pain them to contemplate that, in addition to the sacrifice jurors make for our country, they must suffer trial lawyers and jury consultants scouring over their Facebook and other profiles to dissect their politics, religion, relationships, preferences, friends, photographs, and other personal information,” he wrote.

New York State has tighter rules when it comes to researching jurors on social media. In a handful of ethics opinions, followed by a set of guidelines published in 2014, the New York State Bar Association has directed attorneys to ensure not only that they do not proactively contact a juror via social media, but that there is no automatic notification sent to the juror by the social media service that would put the juror on notice they were being scrutinized by the trial team. On LinkedIn, for example, users can sometimes see who has recently browsed their profile.”A lawyer must take measures to ensure that a lawyer’s social media research does not come to the attention of the juror or prospective juror,” the guidance says.

What if your jury pool includes someone who is a “friend” of a “friend,” or belongs to an alumni group, allowing the lawyer to see potentially nonpublic postings? That’s a grey area, according to the bar association document, which only urges “caution” in such a circumstance. But the U.S. District Court for the Northern District of New York, in a local rule adopted at the beginning of 2016, says that lawyers are allowed to research jurors’ social media only so long as the “website or information is available and accessible to the public.”

• Washington: This past January, U.S. District Judge James Robart of the Western District of Washington (who came into the national spotlight for his order blocking President Donald Trump’s travel ban) offered a cautionary tale: research jurors all you want, but think twice before asking about what you learn. Robart said that in a case before a colleague on the bench, the lawyers had run a Facebook search on each of the jurors. “And when they got to Juror No. 5 and the lawyer said, ‘And so how did your daughter do in the horse competition?’ there was a revolt among the jury,” Robart recalled, according to a transcript. “They really do not expect that you’re going to inquire into their personal lives. That’s just a word from experience.”

• New Jersey: If you don’t bring your laptop to court, you’re out of luck. That’s the takeaway from a 2010 New Jersey appellate court ruling in a case known as Carino v. Muenzen. The court held that lawyers have the right to research potential jurors online during voir dire, and that the trial court had erred by preventing the plaintiff’s attorney in the medical malpractice case from doing so simply because the defense team had not brought their computers and couldn’t do the same. “[I]nternet access was open to both counsel, even if only one of them chose to utilize it,” it ruled.

• District of Columbia: The D.C. Bar in late 2016 adopted an opinion that encouraged researching jurors online. “Competent and zealous representation … may require investigation of relevant information from social media sites of jurors or potential jurors to discover bias or other relevant information for jury selection,” its Legal Ethics Committee wrote. While noting that contacting jurors via social media is prohibited, it added that reviewing jurors’ social media profiles “could reveal misconduct by the juror or others.”

• Pennsylvania: The Pennsylvania Bar Association has taken a similarly permissive if not as enthusiastic approach as D.C., saying in a set of 2014 guidelines that during jury selection and trial, “an attorney may access the public portion of a juror’s social networking website but may not attempt or request to access the private portions of the website.” Unlike New York, the Pennsylvania Bar does not view automatic notifications such as those sent by LinkedIn as problematic. “There is no ex parte communication if the social networking website independently notifies users when the page has been viewed.”

Ben Hancock is a San Francisco-based reporter for The Recorder and Law.com. He writes about the future of litigation, including third-party finance, legal data analytics, and artificial intelligence in the law. Contact Ben at [email protected]. On Twitter: @benghancock